Why is the Government consulting the Vatican on national policy? 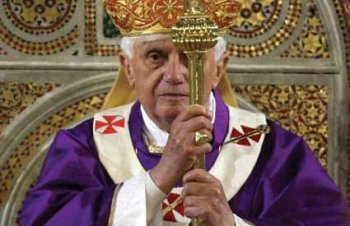 A large delegation of Government Ministers is to visit the Vatican next week to consult about British Government policy with the Pope. Among the six ministers going to Rome are Jeremy Hunt, the Secretary of State for Culture, Olympics, Media and Sport; Alan Duncan, the Minister for International Development; and Greg Barker, the Energy and Climate Change Minister.

The delegation will be led by Baroness Warsi who will lecture at the Pontifical Ecclesiastical Academy on the subject of the place of religion in modern political discourse.

The British delegation will reportedly discuss climate change, arms proliferation, religious tolerance, interfaith dialogue and the crisis in Somalia and the Horn of Africa with the Pope and Vatican officials.

The Daily Telegraph reports a "Vatican observer" as saying:

"It's a very strong delegation and it's a way of showing that the relationship with the Holy See didn't end in a blaze of fireworks when the Pope's visit finished. It's one of the most comprehensive British visits ever in terms of the range of interests represented."

The politicians will be accompanied by the leader of the Catholic Church in England and Wales, Archbishop Vincent Nichols.

Terry Sanderson, President of the National Secular Society, said: "What on earth is a delegation of senior British politicians doing consulting the last theocracy in Europe on our Government policy? We are a democratic nation and we didn't vote for the Pope – so why are we involving him in policy-making? Polls show that very few people in this country agree with his teachings – and that includes Catholics.

"This is an extremely undesirable development. The Government should be challenging the Vatican's assumed and suspect power, not indulging it."