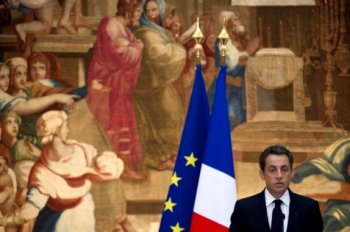 As soon as politicians start sucking up to religious leaders, you can be sure there is an election in the offing. This is certainly the case in France, where President Nicolas Sarkozy is suddenly very enthusiastic for religion to play an important role in "public life". The fact that he is lagging in the polls may also have something to do with it.

But he's walking a bit of a tight-rope here because he knows that the French people value their secularism above almost everything else. And so, although he offers emollient words to the various priests and mullahs, he actually offers them nothing new at all.

At a traditional New Year meeting on January 25, he told a gathering of religious leaders that although the country has a secular constitution it doesn't mean that religion shouldn't be closely involved in public policy.

He said: "A secular society is one which has decided to separate churches from the state, so the state doesn't have to account for its choices to churches, and churches don't depend on the state to live and organise – this is secularity, a secular republic," he told religious leaders.

"But this doesn't mean churches, respecting the law, are forbidden from speaking. Nor does it mean your words shouldn't go beyond the walls of your places of worship. That would be a strange idea of democracy: Everyone has a right to speak, except you," he told the leaders, including Paris Cardinal Andre Vingt-Trois.

Sarkozy said France's status as a "secular and social republic" was "written in black and white" in its constitution, along with its guiding principle of "laïcité," or secularism.

However, he added that the country's religions should also participate in national debates and in "creating our cultural identities". He said it would be a "strange schizophrenia" to preserve France's religious heritage while insisting religions had "nothing more to say, offer and impart."

"The spiritual richness you animate, the depth of thought you embody, the values you bear all have a vocation to address themselves to those who never cross the threshold of your churches, mosques, synagogues and temples," the president told the religious leaders.

The Church claims that two-thirds of the French population is Catholic, although less than one in ten goes to Church or has anything to do with Catholicism. 40 per cent declare themselves unambiguously to be atheists. So why does Mr Sarkozy feel the need to make such meaningless abasement to the churches?

In a similar bid to win favour with religious voters before the May 2007 election, Sarkozy (himself a Catholic) pledged to improve ties with religious communities. During a December 2007 visit toRome, he said he believed "laïcité", set out in a 1905 church-state separation law, should be interpreted "more positively" to enable religion to be seen "not as a danger, but as an advantage."

After another Vatican visit in October 2010, the president was accused by opposition politicians of violating the secularism principle by taking part in prayers at Rome's Basilica of St. John Lateran.

In his January speech, Sarkozy defended a controversial April ban on Muslim veils, which he said were "incompatible" the country's values and the "dignity of women".

He added, however, that he was also deeply concerned by recent "aggressions against religious symbols," including attacks on Jewish and Muslim cemeteries, and said the country would guarantee all citizens "the right to practise their chosen faith." But who, other than competing religionists, are carrying out these attacks?

"Not only does our republic guard against intervening in the religious sphere – it will always be ready to defend those who are attacked or threatened because they believe, pray or witness publicly to their faith," the president said.

"Our republic will intervene immediately if citizens start affronting each other and will [act strongly against] all those who seek even once to inflame the furnace of religious hatred on its territory. This ravaging hatred has sometimes been on the point of sweeping France away. Let [us] be clear: It will not do so again."

French newspapers said Sarkozy's speech was a response to a call on 22 January by Francois Hollande, his main Socialist challenger in April-May presidential elections, for the 1905 separation law to be written into the national constitution. The separation law, however, makes an exception for Alsace-Lorraine (formerly inGermany), because this was agreed in a Vatican concordat. The secularist group La Libre Pensée therefore oppose Mr Hollande's proposal because it would make it much harder to reverse the Alsace-Lorraine exception in future.

Cardinal Vingt-Trois also criticized Hollande's proposal, presumably because of the provisions it makes for the remainder ofFrance, as have Orthodox, Muslim and Jewish leaders.

In his speech, Sarkozy said he felt "truly comforted" by the presence of religious leaders, who demonstrated France had "created conditions for peaceful, harmonious and friendly coexistence between religions."

He added that Christianity had become a target in the country, and he praised Cardinal Vingt-Trois for "showing French Catholics are not living in an isolated camp and can respond to provocation with communion. As I've said many times, freedom of conscience is perhaps the most precious good guaranteed by our republican laws," the president said. But he added: "No religion will impose dogmas and precepts in France on those who wish to avoid them. But nothing can prohibit the idea of transcendence from being present in our society. The concord and harmony governing relations between the different religious currents here and irrigating the social body provide an excellent guarantee of peace," he said.

Reading between the lines it is quite clear that Sarkozy is offering religious bodies absolutely nothing new. There is no restriction on them joining in national debate at the moment. The fact that nobody listens to them is another matter entirely.