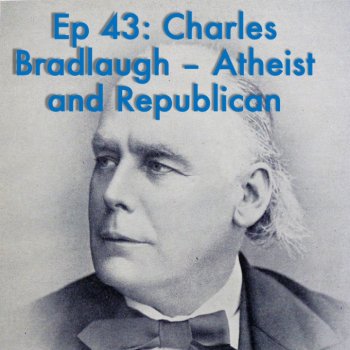 One hundred and thirty years after he died, Professor David Nash and Bob Forder speak to Emma Park about the life and significance of Charles Bradlaugh – the first openly atheist MP, and the founder of the NSS.

This episode, presented by Emma Park, examines Bradlaugh's life and significance, and his relevance to modern debates about free speech.

Emma's first guest is Professor David Nash, historian of blasphemy at Oxford Brookes University. They discuss Bradlaugh's background, intellectual context, and political views, as well as the pros and cons of his personality-driven style of leadership. They also consider why Bradlaugh became a target for scurrilous biographies, including one by his own brother.

Emma then speaks to Bob Forder, NSS historian, about contemporary accounts of Bradlaugh's personality and power as a speaker. They discuss the positive values inherent in Bradlaugh's atheism, in particular his association between religion and entrenched privilege on the one hand, and atheism and liberty for the working classes on the other. Finally, they consider Bradlaugh's far-sighted analysis of state communism.

In the latest episode of the National Secular Society podcast, Professor David Nash and Bob Forder talk to Emma Park about the life and work of Charles Bradlaugh, the NSS's founder and the first openly atheist MP.
Share this episode