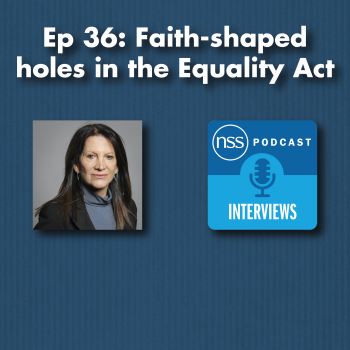 This month marks the tenth anniversary of the Equality Act 2010 coming into effect, a landmark piece of legislation that reformed and improved the law on equality in the UK.

In this episode of the podcast, Emma Park speaks to Liberal Democrat peer Lynne Featherstone. Baroness Featherstone was an MP when the Equality Bill went through parliament, and, as a junior Home Office minister with responsibility for equality, helped to implement the act.

She also wrote the foreword to the NSS's recent report on how religious privilege continues to undermine equality law.

The speakers discuss the significance of the Equality Act when it was made, why so many religious exemptions were carved out of it, and why the act is important to everyone in the UK. They also discuss the findings of the NSS's report.

Emma is then joined by Megan Manson, the NSS's head of policy and research, to consider the report and its implications in further detail.

I'm listening to the latest NSS podcast reflecting on the 10th anniversary of the Equality Act, the Act's significance and ongoing problems caused by religious exemptions.
Click to tweet