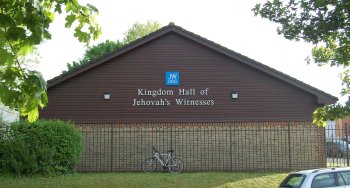 Next week the IICSA inquiry will publish a report into the Jehovah's Witnesses. This can only be damning. But the inquiry hasn't gathered the evidence needed to root out abuse within the organisation, writes Lloyd Evans.

As I write, we are only days away from learning the findings of the Independent Inquiry into Child Sexual Abuse (IICSA) in its investigation of a number of religious organisations, including Jehovah's Witnesses. When the findings are published I expect them to be damning, at least concerning the failings of the Jehovah's Witness organisation of which I was once a member and devoted follower.

I don't see how an organisation that has in recent years cemented a global reputation for the industrial scale cover-up of child sexual abuse could receive anything other than strong condemnation from any self-respecting inquiry or investigative body that wishes to be taken seriously. But am I pining for these findings as needed validation? Will I look on them as the final word on the mishandling of abuse by my former religion? No, and nor should anyone else.

IICSA has barely scratched the surface of a problem that always warranted a much more probing investigation and intervention. The inquiry's investigation of Jehovah's Witnesses in particular is so inadequate that I have come to think of it as a travesty and insult to victims.

I've done my very best to assist IICSA as a core participant in its investigation. And I was grateful that last year, when the Christian Congregation of Jehovah's Witnesses (CCJW) tried to have me thrown off the investigation on the preposterous grounds of hate speech, IICSA gave this short shrift. But the inquiry's failings have been evident almost from the very beginning.

IICSA is a woefully underfunded enterprise; a pound shop version of its equivalent Royal Commission in Australia, which did an incredible job of investigating abuse between 2013 and 2017. According to research by Mandate Now, a pressure group advocating mandatory reporting of all child sexual abuse, the gulf in funding between IICSA and its Australian equivalent is stark.

Whereas the Australian Royal Commission was given an annual budget of around £45m, IICSA has received a meagre £23m (approximately) annually between 2015 and 2019 – despite its investigation encompassing a combined England and Wales population that is more than double that of Australia. In other words, IICSA has received nearly half the funding for more than double the workload. I'm afraid the old adage applies: "you get what you pay for".

From the outset in my evidence to IICSA I have implored the inquiry to use its statutory powers to pursue a full and independent audit of all data held by Jehovah's Witnesses on accusations of child sexual abuse. When Australia's Royal Commission did this, it found that 1,006 perpetrators from among Jehovah's Witnesses stretching back to 1950 had amassed around 1,800 victims, with not a single accusation of abuse reported to Australian authorities. Based on these figures, I scoured the Jehovah's Witness yearbook data and extrapolated a likely figure of 2,300+ perpetrators and 4,100+ victims for the entire UK.

IICSA is aware of these jaw-dropping numbers and has been handed clear evidence in the organisation's own documents that Jehovah's Witnesses have a written policy of gathering sex abuse records into a secret database that is not shared with the authorities. IICSA even allowed CCJW to cherry-pick a tiny sampling of the figures from this database and present them as the only figures that mattered.

The figures presented were damning enough. On page 23 of his first written evidence, JW spokesperson Paul Gillies admitted that out of 67 accusations, 30 had not been reported to the police – and the 37 that were reported were reported "in most instances" by the victim or their family (in other words, not necessarily at the behest or initiative of the organisation).

But these were only records related to accusations against elders (priests) and ministerial servants (deacons), or where the abuse occurred within a JW kingdom hall or place of worship. Furthermore, the figures only represented accusations brought to the attention of CCJW between September 2009 and August 2019 related to abuse within that period.

Apparently abuse perpetrated any earlier (August 2009?), or abuse perpetrated by rank and file members, or abuse occurring outside of a kingdom hall (i.e. in a family home), didn't matter or wasn't worthy of any serious analysis. This was a perfect example of a group under investigation being allowed to mark its own homework.

The outcry regarding IICSA's refusal to apply proper scrutiny to Jehovah's Witnesses, despite having full knowledge of their conspicuously egregious child safeguarding policies, was loud and unequivocal. More than 6,000 signed a petition calling for IICSA to do their job properly and "get the data". IICSA's response?

It didn't just refuse. In a written letter to the person behind the petition, solicitor to the inquiry Martin Smith bizarrely claimed that it would be "unlawful" for IICSA to pursue full disclosure of the relevant abuse records. He wrote:

"While it is true that the CPIROS investigation will not formally conclude until the panel has published its investigation report, the only task remaining for it is the writing of that report. This work is well under way and it would not be appropriate, lawful or fair for the inquiry to seek substantial additional evidence from any particular organisation in the manner sought by the petition at this stage of its process."

Yes, a statutory inquiry tasked with investigating sexual abuse was claiming it was against the law to do its work.

We can speculate any number of reasons as to why IICSA has been so half-hearted in undertaking work regarding which it once promised it would leave "no stone unturned". Thousands of abuse records being knowingly withheld from police is a pretty big stone if you ask me.

And let's remember: this is not some game. Any foot dragging or lack of appetite concerning the thorough investigation of one of the most damaging crimes a human can perpetrate against another human translates into more children molested, more abuse covered up, and more lives ruined. Every second of inaction begets more abuse.

My own feeling is that lying at the heart of IICSA's glaring apathy (to the point of making misleading statements about what is or isn't "lawful") is a societal indifference to fully scrutinising child sexual abuse, as evidenced by how grossly underfunded the whole thing is.

This underlying lack of urgency, which some justifiably reason is informed by a desire to not overburden a prison population that is already bursting at the seams, is compounded in my view by societal deference to religion.

It should not be possible in the 21st century for any organisation to keep thousands of secret records on child sexual abuse hidden in plain sight. If it were a football club, playgroup or gym franchise concealing criminal evidence to this extent it would be all over our newspaper front pages, and the police would be breaking down the doors and seizing documents. But if it's a religion doing this, we have learned as a society to look the other way - even in cases where a statutory inquiry ought to be doing the exact opposite.

Lloyd Evans is the founder of JWSurvey.org. He runs the 'John Cedars' YouTube channel and is the author of two books on leaving the Jehovah's Witnesses. The views expressed in our blogs are those of the author and may not represent the views of the NSS.