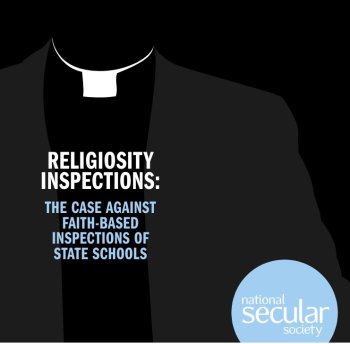 In a 21st century school system, should faith groups have the authority to inspect schools to determine whether the education they provide is sufficiently religious?

Most people will be familiar with England's school's inspectorate, Ofsted – or its equivalents in Wales and Scotland, Estyn and Education Scotland. These bodies inspect schools to provide information to parents, to promote improvement and to hold schools to account for the public money they receive.

But many people won't be aware that these aren't the only school inspections required by law.

Around one third of state-funded schools are faith schools. These schools are subject to additional inspections by religious bodies. The inspections are mandated by Sections 48 and 50 of the Education Act 2005. Their purpose is to evaluate the religious aspects of school life – denominational religious education, worship and the overall approach to promoting a religious ethos.

You might think that ongoing secularisation and the decline in the church‐going population would give rise to a corresponding decline in religion's involvement in state‐funded education. Instead, successive governments have bolstered religion's influence over state schooling by funding ever more faith schools.

Section 48 inspections are yet another mechanism for religious groups to exert control and influence children's education. They ensure organised religion remains a powerful force in education at both state and community levels. The inspections are used by faith bodies to pressure school leaders into ramping up the religiosity in schools. They influence decisions about the way in which education is provided and the environment in which it is delivered.

School leaders are more qualified and better placed than religious bodies to make these decisions. They understand their school communities better than anyone, and will usually be keenly aware that, unlike a church congregation, their pupil intake is far from religiously homogenous. Few families choose schools on the basis of their religious character, and many parents have little option other than a faith school. Yet religious inspection regimes coerce schools into acting like places of worship.

Now a new National Secular Society report has made the case for ending these inspections.

The report highlights numerous examples from school leaders of inspections being used to "sell the Church of England message", as one teacher puts it. The Catholic Church itself says the inspection process is intended to ensure schools "fulfil their mission of making Christ know". This is state-funded evangelism, plain and simple.

Take this Section 48 inspection report where a Catholic school in Birmingham is judged as "outstanding" for being "innovative in the way it uses the internet to evangelise"; gives staff, pupils and governors "many opportunities to pray"; and delivers relationships and sex education in a way that is "consistent with the teachings of the church".

In other words, the school is praised for inculcating children into the Catholic faith – rather than giving them the freedom to make up their own minds about their beliefs, or giving them the education they need about relationships and sex.

But particularly in faith schools, religious education is too often an exercise in faith formation – a hangover from history more akin to confessional 'religious instruction'. The justification that Section 48 inspections are needed to assess RE provision tends to prove this point.

Teaching about religion or belief in schools should be objective, critically-informed and pluralistic. And like any other area of the curriculum, it should be inspected by Ofsted.

The purpose of education should be to develop critical faculties. But religiosity inspections are all about ensuring schools promulgate faith and impose acts of worship on pupils. This is all educationally inappropriate.

Even in an education system that includes faith schools, such extensive clerical meddling shouldn't be permitted, let alone funded with public money.

Yet the taxpayer stumps up £760,000 every year to fund inspections that serve the interests of religious groups, rather than pupils.

Britain is becoming more non-religious and more religiously diverse. It needs a secular education system that educates children of all faith and belief backgrounds together and enables children to make up their own minds about their beliefs.

And if we are going the cut the archaic connection between religion and state education, bringing an end to religion's role in inspecting schools would be a good place to start.

This blog is also published on Medium.