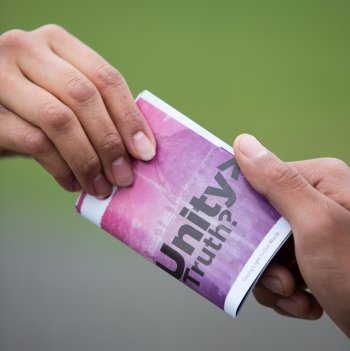 Some registered charities exist primarily to convert members of one religion to another. Megan Manson says such activity is harmful to community cohesion – and shouldn't be treated as a valid charitable purpose.

In the UK's increasingly diverse society, community cohesion is essential to ensure all people from all walks of life can get along. At the NSS we see secularism as the best means of fostering social cohesion, because it ensures all people, regardless of religion or belief, are treated equally in public policy and equally before the law.

Some religious activities are divisive in nature and pose a threat to community cohesion. Public proselytism in particular can be contentious. Unwanted evangelism can be annoying, alienating and sometimes distressing if suggests non-believers and 'transgressors' are sinners deserving of eternal punishment. Yet many organisations that exist primarily to proselytise are registered charities.

And some of those charities may even target specific religious groups for conversion, as highlighted in a recent report in The Jewish Chronicle.

In the report, Jewish community consultant Steven Jaffe revealed that approximately 15 registered charities "exist exclusively to convert Jews to Christianity", or as a significant part of their purpose. These charities have raised more than £35m in the past five years.

One such charity identified in the report is Messianic Testimony. According to the Charity Commission, it exists for "the advancement of the Christian faith" through "the evangelisation and discipleship of Jewish people" and "by the teaching of biblical truth with specific regard to the purposes of God for Israel and the Jewish people".

Another is Eurovision Mission to Europe, a member of the Evangelical Alliance. Its most recent annual report says that in 2016 its focus was on "evangelism in Israel amongst Holocaust Survivors".

And then there is The Vincent Society, which operates under the name CMJ UK. Its charitable objects include "undertaking evangelism which is appropriate for but not exclusive to Jewish people". Its activities include "Jewish Evangelism" training for "Christians and Church groups" and youth evangelism training in partnership with Scripture Union.

The reason for this apparent fixation on converting Jews is, as Jaffe identifies, largely theological. Some Christian traditions teach that the world's salvation lies in converting Jews, while others point to biblical pronouncements about taking Christianity's message "to the Jew first".

But many in Jewish communities, understandably, do not welcome these evangelists' attempts to convince them to turn to Jesus in order to fulfil perceived religious duties. As Jaffe says, such evangelism "does poison Jewish-Christian relations" and "targeted and at times aggressive or underhand proselytism cannot co-exist with friendship".

And as recently as September, an organisation called Two:Nineteen registered with the Charity Commission. Its purpose: "to advance the Christian religion by providing training resources to churches to enable non-speaking (sic) members of the local community to participate in the activities of the local church, including by providing instruction in English language". In other words, it exists to evangelise to immigrants through English lessons.

It's fairly clear that its mission of "stimulating gospel outreach and cultural integration" is a one-way street. One blog on Two:Nineteen's website says that when a Muslim asked to give out literature promoting Islam at one of the English classes, she was told that this "was not appropriate for a church-based group" and "there have been opportunities for the church to bless her family in turn since then". Another blog on the website about "Understanding the Chinese Worldview" says that "misguided religious practices", i.e. traditional Chinese beliefs, "need to be confronted".

There is little doubt that those who support or work for these charities sincerely believe they are doing good. Their desire to convert people to Christianity comes not from malice or spite, but from a deep conviction that the Christian way to live brings happiness in this life and thereafter.

But good intentions are not enough when it comes to charity. A charity must serve a public benefit and must not cause harm – that's why the state grants charities such generous tax breaks and other financial benefits. It is hard to recognise how a charity that exists primarily to convert members of one religion to another serves a benefit to anyone except the religion of the charity. Conversely, it is easy to argue that such a charity may be harmful because it can foster division, intolerance and mistrust between communities.

So why are such organisations able to become charities? It is because 'the advancement of religion' is one of the recognised 'charitable purposes' in law. Although in theory there is a requirement for religious charities to pass the 'public benefit test', our 2019 report found that in practice a huge number of religious charities appear to do nothing but benefit themselves, sometimes to the detriment of the public.

A liberal society should allow religious organisations to try and convert others, provided such activity does not exploit the vulnerable. That is a basic necessity of freedom of religion and freedom of speech. But should a liberal society encourage and facilitate such behaviour, particularly when it undermines community cohesion, by granting charitable status to organisations that engage in it?

There are many religious charities, just as there are many secular charities, which genuinely provide a tangible public benefit. But every one of those charities can classify its activities under charitable purposes other than 'the advancement of religion', for example 'the prevention or relief of poverty', 'the advancement of education' or 'the promotion of religious or racial harmony'.

While 'the advancement of religion' remains on the list of charitable purposes in law, we will continue to see the emergence of charities that do little or nothing but pit religious communities against each other in the name of spiritual salvation. And this should cause us to question whether 'the advancement of religion' belongs on the list of charitable purposes at all.

Image by Robert Koorenny from Pixabay (cropped to fit).