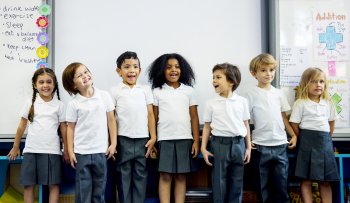 As research shows social integration is key to fostering positive attitudes toward people of different religions and beliefs, Megan Manson says we should challenge the segregation and division inherent to faith schools.

First the bad news. The research found that when compared with their perception of other faith groups, British Muslims have the least favourable attitude towards Jews, with an average 'favourability' rating of 5.49 out of 10 (compared with 8.09 for fellow Muslims). The only faith or belief group to be ranked with lower favourability than Jews were atheists, at 5.10.

Now the good news. The research also found Muslims who are more socially integrated through their friendship groups have a more favourable view of all non-Muslim groups, including Jews (with an average rating of 5.65) and atheists (5.23).

These figures should come as no surprise. When people of different religions and beliefs mix socially on equal terms, they can better understand and trust each other. That's why the National Secular Society promotes a secular democracy, which treats people of all religions and none equally, as the best model for a culturally diverse society like the UK.

It is therefore bewildering that a number of government policies encourage segregation and division according to religion or belief. Perhaps nowhere is this more acute than in our school system.

A third of our state-funded schools are faith schools. Many of these explicitly segregate local communities by operating discriminatory admissions policies that prioritise families who match the school's faith ethos. Even those faith schools that do not discriminate in admissions send the message that their schools cater specifically to one religion, rather than providing an environment where children from all religion and belief backgrounds are equally welcomed.

Because religion is frequently linked to ethnicity, faith schools also segregate along racial lines. Islamic, Sikh and Hindu schools in particular have been recognised as having low racial diversity.

Additionally, research by Prof. Irene Bruegel of London South Bank University found white children were more likely to "cluster together" within denominational schools, making fewer friends of different ethnicities than at schools without a religious character.

The same study found that the positive benefits of attending a primary school with a mix of children from different ethnic and religion or belief backgrounds extend into the early years of secondary school. These children were more likely to make new friends from different backgrounds, and were more aware of racial discrimination.

The benefits even reached their parents, who "learn to respect people from other backgrounds as a result of their children's experiences".

It is interesting to note that the children in non-denominational secondary schools involved in the study were largely opposed to faith schools. One child said they thought faith schools are "out of order" because they single out "only one group and the rest get kicked out". Another said they weren't a good idea because "you don't get to mix with other cultures, which means you don't learn about different cultures".

In more recent years, the government has talked much about the importance of social cohesion, but has failed to address the elephant in the room: the faith schools splitting communities apart. In 2018, its Integrated Communities Strategy green paper expressly backed faith schools, despite saying new schools "should be inclusive and promote community cohesion".

Instead it promoted schools linking programmes between pupils from local schools of different faiths, or no faith. These programmes resemble 'exchange programmes' between schools from different countries – the pupils exchange photographs and details about themselves, and finally meet at a "neutral venue" to do classes or activities together.

It seems strange that children living in the same country, let alone the same town, require this kind of 'cultural exchange' programme to get to know each other. While well-intended, these programmes do little more than putting a sticking plaster on the issue, rather than treating the underlying problem of having segregated schools in the first place.

In fact, one case in Prof. Bruegel's research suggested primary school twinning "had little effect on white children's attitudes" and instead fuelled "their community's sense of losing out on investment". Bruegel concluded that "day-to-day contact between children who can more easily see each other as equals has far more chance of breaking down barriers between communities, than school twinning and sporting encounters". The two-thirds of our schools that have no religious designation do that just fine.

Dr Ehsan's latest findings on the importance of social integration, and the dangers of segregation, should serve as a wake-up call to politicians and policy-makers. If we are to promote harmonious relationships between people of different religions and beliefs, we must take the bold, brave step of challenging faith groups who wish to use our school system to further their religious agendas.