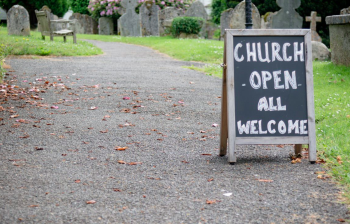 As a group of religious leaders threatens legal action over the closure of places of worship during the coronavirus crisis, Stephen Evans says public health must be the priority in deciding when to reopen them.

We're living through a public health crisis unprecedented in the modern era. At such a time the government has an obligation to take steps to protect people's lives – and unfortunately this involves temporary restrictions on individual freedoms. It should go without saying that any restrictions must be necessary to protect public health and proportionate to that aim.

But for now, we still can't get our hair cut, go swimming, get our nails done, go to the pub or attend football matches. And it's still not possible to attend a church, mosque, synagogue, temple or other place of worship, either.

The secretary of state for communities, Robert Jenrick, has made it clear that places of worship will only be opened when the government is confident that people can use these spaces safely and will not put themselves or others at risk. A specific 'places-of-worship task force' has been set up which includes representatives of faith groups. It agreed that reopening should be phased, and only happen when the evidence shows it's safe to do so.

A small coalition of bishops and religious leaders have taken issue with this and threatened legal action to force the government to allow places of worship to open. Their letter threatening a judicial review warns that the state closure of churches is "unlawful and unnecessary" and "an extreme interference" with human rights.

A major bone of contention is that the government's roadmap to lift restrictions puts places of worship in the same category as pubs, restaurants, cinemas, hairdressers and beauty salons.

The fringe coalition of 'religious leaders' rejects any secular assessment which considers church services "less important than steady food supplies and protection of health". Instead they ask the government to bow down before the "believer's worldview" that attending a church service is vital for "achieving eternal salvation of the soul, which is infinitely more important than even a survival of the body."

Disdain for secularism runs through the letter like the words on a stick of Blackpool rock. "If churches are to be closed, that must not be done by people who may well have never been to a church in their lives", it insists.

Amid all the pomposity and bluster of the letter, the clear line of argument is that religion should be above the law.

The assorted bishops claim that closure and opening of churches for services is "a matter for ecclesiastical authorities and not for temporal ones". They reject any secular public health test for the opening of places of worship and demand it must be a theological one.

This is dangerous nonsense. It would effectively mean the churches are a law unto themselves, and to hell with the ramifications for public health.

This is particularly reckless given the prevalence of deadly coronavirus clusters associated with religious gatherings around the world.

Despite religious services acting as hotbeds for Covid-19 outbreaks in the United States and beyond (in South Korea over 5,000 cases were traced to one person at a religious service) evangelical Christians, spurred on by President Trump, are defying or demanding exemptions from public health orders temporarily barring public gatherings.

But their efforts took a blow last week when the Supreme Court decided with a 5-4 vote to uphold the California governor's order restricting religious service gatherings as part of its pandemic response effort.

In a scathing opinion, chief justice John Roberts indicated that he will not join conservative judges' escalating efforts to override public health measures in the name of religious freedom. This is all the more noteworthy because Roberts has tended to side with those who present religious freedom as an unqualified right during his time on the bench.

The court decided that from an epidemiological perspective, religious gatherings are more like concerts, spectator sports and theatrical performances than trips to supermarkets, restaurants and hair salons, where people tend not to congregate in large groups.

The legal action in the UK is being spearheaded by gay conversion therapy advocate Pastor Ade Omooba, co-founder of Christian Concern and the Christian Legal Centre – a group which erroneously claims UK Christians are being 'persecuted' for their beliefs. But the Sikh Federation has also reacted angrily to plans to keep places of worship closed until at least 4 July.

Many within Britain's religious communities, which have been hit hard by coronavirus, are more cautious. The Church of England's Sarah Mullally, the bishop of London, said churchgoers are "feeling real disappointment and hurt, that places of worship remain closed to the public" – but also warned that churches may not be back to normal by the end of the year. Ibrahim Mogra, a leading imam from Leicester, expressed scepticism that social distancing can be maintained in mosques. "We must understand that we have a duty to protect others and to protect ourselves," he said.

Maintaining social distancing might be possible with a few Anglicans worshipping privately in a big old draughty church, but we also have to consider how it might look in other places of worship. It might not be quite so easily observed during Friday prayers at the mosque or in the black majority Pentecostal churches which tend to use unconventional and often cramped spaces for services. The fact that Covid-19 appears to have a disproportionate impact on people of black, Asian and minority ethnic backgrounds should be taken into account here. Any government guidance concerning places of worship needs to be clear, consistent and even-handed. And even when general restrictions are lifted, places of worship should only open where social distancing can be maintained.

The right to religious freedom is as important as any other, but it's not absolute. Churches and other places of worship should be free to open as soon as it's safe to do so. But the timing should be determined by the scientific advice, not special pleading from religious groups. Granting special privileges to religion during this coronavirus crisis would put public health at risk. There's no right to risk spreading a virus, and ultimately, causing unnecessary deaths.