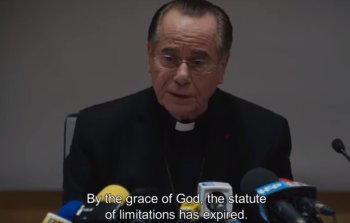 Earlier this year, France's most senior Catholic, Cardinal Philippe Barbarin, was tried for failing to disclose to police his knowledge of the sexual abuse by a priest of around 70 boy scouts, over three decades.

Despite clear evidence that the cardinal knew of this, and years of pressure on prosecutors to act, they sat on their hands. Could their reluctance to act against Barbarin have been influenced by the continuing support given to him by the pope?

Such was the outrage of the long-suffering victims/survivors that some of them scraped together sufficient funds to bring a private prosecution. The NSS contributed to this, too.

Few thought they stood any chance of success, particularly given the continued opposition from the public prosecutor but, against the odds, the cardinal was convicted. He tendered his resignation, which the pope refused to accept, pending an appeal. Nevertheless, Barbarin has been relieved of control of his former archdiocese of Lyon.

The story of the victims' heroic fight has now been made into a film. It was released for viewing by the courts only the night before its first screening in France, following a legal challenge. Now, from 25 October, By the Grace of God is being screened in the UK. A trailer is here. Venues include Birmingham, Cambridge, Glasgow, Hull and London. It will also be available online (pay-per-view).

I cannot recommend the film too highly. It is moving in so many ways. We see how psychologically fragile and vulnerable most survivors are as they struggle with misplaced shame. Understandably they are reluctant to relive their traumas but their need for justice and closure overcomes that reluctance.

The abuse causes some to abandon the church but those that remain faithful agonise over challenging the church that they have revered. One well-heeled, clearly pious, mother turns the knife in the wound by berating her son contemptuously for taking on the church. "You always were good at stirring up shit," she tells him.

A father dismisses his damaged son's abuse as trivial.

As the group campaigns for justice, the emotional and time commitments become overwhelming. A trial looks to be impossible unless they can find more victims, supporters, time and money. But they are driven on by a growing fury as they learn how much the church hierarchy had been aware of for so long and how little it really cared.

The film's title comes from an unguarded comment Barbarin made at a press conference he convened. Reporters were stunned with his aside: "Most of the facts, by the grace of God, fell outside the statute of limitations."

Looking at the wider picture, on one hand the church's intransigence at the highest level seems unshakeable. The pope's own record on tolerating abuse is abysmal. The Vatican is obliged under the UN convention on the rights of the child (CRC) to cooperate fully with judicial proceedings and inquiries into abuse and make available all the relevant evidence that it holds. Yet the pope determinedly refuses to countenance that.

But the Vatican is far from having it all its own way. Papal platitudes and apologies on clerical abuse are no longer credible. The Irish PM Leo Varadkar shamed humiliated the pope publicly over his inaction on clerical abuse and called for disclosure on child abuse by priests last year.

Films such as this raise awareness of the scale of abuse and the church's continuing complicity. Spotlight won the Academy Award for Best Picture. It chronicled the determination of the Boston Globe's reporters to expose endemic abuse, overcoming the might of a church that would stop at nothing to frustrate them, but ultimately to no avail.

Kler (clergy), inspired by real events, depicted abusive and corrupt priests and bishops in Poland. Despite (or because of?) the attempts to ban it, Kler has smashed Poland's box office records.

The mounting list of investigations – for example in the USA, Australia, Germany, France, England & Wales and Scotland – have also done huge damage to the church's reputation and its following. Survivors and anti-abuse organisations are also doing a tremendous job putting pressure on the church. Child Rights International is to be congratulated for its comprehensive briefing on the church and its shortcomings relative to the CRC.

And all this is starting to do some good and increasing the chances of justice for victims.

Even the Catholic Church isn't entirely monolithic. In some countries the church is moving in the right direction and new laws are making criminal and civil abuse prosecutions easier.

In September the National Secular Society told the UN human rights council in Geneva of the Vatican's near-complete failure to respect its obligations under the CRC to properly investigate and prevent the clerical abuse of minors. It certainly turned heads – we have never heard of anyone else criticising the Vatican there. We backed up our intervention with a more detailed report, also handed in person to the Vatican's representative at the council.

We have been in touch with some in Rome who are trying to turn the ship around and to their credit have created an important precedent by removing diplomatic immunity from the French papal nuncio accused of criminal sexual misconduct.

We will next be urging them to allow Vatican officials to be cross examined in trials and inquiries and to table its well-overdue report to the UN committee on the rights of the child.

Note: On Monday (28 October) the IICSA inquiry into child sexual abuse will open its full public hearing into the extent of any institutional failures to protect children from sexual abuse within the Roman Catholic Church in England & Wales.

This follows bruising evidence sessions involving the archdiocese of Birmingham (led for many years by Vincent Nichols, now a cardinal and the most senior Catholic prelate in England & Wales) as well as Benedictine schools in Ealing, Ampleforth and Downside. NSS vice president Richard Scorer will be representing victims and survivors at the hearing.

By the Grace of God is released today. It is being screened in some cinemas and is available to watch online through Curzon Home Cinema.