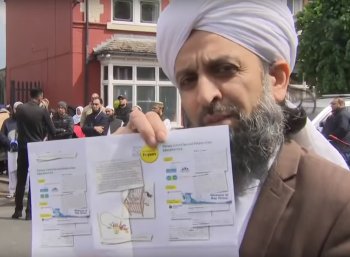 As the campaign against relationships and sex education spreads and grows increasingly aggressive, Yasmin Rehman says politicians' pandering to intolerance will be a disaster for LGBT people, Muslims and wider society.

Once again Birmingham is seeing noisy and aggressive protests at the gates of a primary school from Muslims opposed to LGBT-inclusive teaching.

In the last week alone the head teacher of Anderton Park Primary School has received threats. Mainly female pro-LGBT activists have reportedly been confronted and egged. Protesters claim they managed to take 600 students out of classes earlier this week. Flyers are being sent around encouraging people to join protests against a school's "brainwashing".

The protesters are not simply a group of misguided or misinformed parents. This is a coordinated effort to force our schools to accept an Islamist agenda. The demonstrations outside Anderton Park are organised by a man who does not have children at the school, Shakeel Afsar. He's being helped by Amir Ahmed, who ran the protests outside Parkfield Community School earlier this year. According to the school's headteacher Sarah Hewitt-Clarkson, "the vast majority" of the protesters are not parents at all. And people such as Abdullah Bahm, from West Yorkshire, have joined them from far and wide.

Nor is this confined to one primary school, or one programme of teaching. Anderton Park does not teach the No Outsiders curriculum which protesters first objected to at Parkfield. And the campaign against teaching children about relationships and sex is spreading nationwide. Last month reports said leafleters were targeting schools in Manchester, Oldham, London, Blackburn and Bradford.

And last week a BBC Newsnight investigation found that letters opposing relationships and sex education (RSE) had been sent to schools in Birmingham, Bradford, Bristol, Croydon, Ealing, Manchester, Northampton and Nottingham. Christian parents have also sent some in Kent. Abdullah Bahm has said the campaign in Birmingham is a "pilot project" for a national campaign, and he's putting together 'parent packs' to encourage more Muslim parents to join it.

Freedom comes with a huge responsibility. This responsibility in my view extends to those of faith to acknowledge that we must speak out against every abuse, and not just those in which people from our own group or tribe are the victims. This is not an either/or choice. There can be no hierarchy of victimhood. We must be prepared to examine our own faith ideologies and ask those difficult questions about what we do when religion endorses, justifies and allows discrimination, prejudice, abuse, threats and violence.

Religious leaders must ask themselves whether they are prepared to stand by and protect those who have a different world view to themselves. But where are these religious leaders when teachers in our schools are trying to teach our children how to respect diversity and difference, how to keep themselves safe from harm and abuse and how to have a voice? If you're in many of our cities and towns right now you can see for yourselves what is happening.

The backlash against the teaching of RSE has left me stunned. It is no less than a perfect coalition of fundamentalists against what they see as a common threat – LGBT people. And it is led from the front by Muslim parents who are, if not the most vocal, at least the most visible in media coverage.

A few months ago I attended a meeting in my home town where Dr Kate Godfrey-Faussett, a prominent voice in the anti-RSE campaigns, spoke about her fears over how RSE would affect Muslim children's identity. To say I was horrified at what I heard is an understatement. I am a seasoned researcher on these issues and yet if I had not been at the meeting in person I am not sure I would have believed what had been said there.

The meeting was hosted by Hassan Hameed, a prison imam, and Dr Godfrey-Faussett was the key speaker. They delivered their presentations to a packed room of hundreds of Muslim parents and members of the local community. Many of those attending would have had been there out of concern for their children but what was shocking, and remains so, is that the message conveyed at the meeting, the lies and misinformation from Dr Godfrey-Faussett were never verified or questioned.

The aim of the meeting was to get parents to sign up to a national campaign of action with the intention of stopping RSE teaching. According to Dr Godfrey-Faussett RSE is robbing Muslim children of their identity, will turn them gay and is something that should concern Muslims more than Palestine or Kashmir. It will result in girls becoming promiscuous and having several abortions before the age of 12 without their parents' knowledge or consent, thus rendering them sterile. Apparently it's also part of a concerted international attack on Muslims by the UN and International Planned Parenthood Foundation. If I had not been in that room I do not think I would have believed it was possible to rant in this way and still be considered 'plausible'.

I became so worried about what I was witnessing that I felt I should leave early, after two hours. I sat in the car outside and tried to take stock of what had happened. I was shaking. A man knocked on the window and said he hoped I'd learned something. He said parents needed to have been consulted. What other subjects are parents consulted about – Maths or History? Do they ask for consultation in these subjects too? Are they consulted on religious teaching and aspects they may not agree with?

I went home and broke down. I kept asking myself – how had it come to this? Where had reason and common sense gone in that meeting? Why were the speakers not challenged? It has come to this because successive governments have failed to take a stand and instead carried on accommodating faith groups and their demands.

As I reflect on this episode I consider the parallels with the Salman Rushdie affair of 1989. Once again Muslims are protesting about something which many of them haven't even read. Then it was a novel; now it is the No Outsiders programme or the government's position on RSE. Again mob rule is winning: then the author was forced into hiding and those who translated his book physically attacked; now schools are being forced to change what they teach.

Again there is a coordinated effort to whip Muslims into a frenzy and to demand acceptance of reactionary views out of a sense of misplaced 'respect'. Again politicians are pandering to those behind the trouble. Witness the local MP in the area where Anderton Park is, Roger Godsiff, publicly doubting whether the lessons there were "age appropriate", despite Ofsted's judgement that they are. Witness another Birmingham MP, Shabana Mahmood, defending the protesters who forced Parkfield to suspend its lessons earlier this year.

And again the consequences will be awful. RSE programmes which protect LGBT rights and women's rights are under threat. Ultra-conservative Muslim intolerance and intransigence is playing out publicly, adding more fuel to the culture war between Islamists and anti-Muslim bigots. This episode is undermining the idea that we should live in a cohesive society where human rights are universal. We can only hope that, amid all the noise and abuse, enough people with enough power think that idea is worth defending.

Editorial note (added Friday 24 May): Since we published this blog it has been announced that Anderton Park Primary School would close early on Friday in response to the escalating protests.