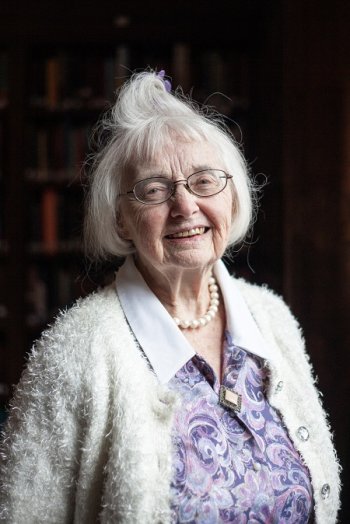 Former NSS president Barbara Smoker's book My Godforsaken Life: Memoir of a Maverick reminds us of the value of ordinary people's principled activism and provides a link to secularists of the past, says Helen Nicholls.

On 27 May 1989 thousands of hard line Muslims marched through London to protest the publication of Salman Rushdie's The Satanic Verses. This was just a few months after Ayatollah Khomeini had issued the notorious fatwa encouraging Muslims to murder Rushdie. Standing alongside the route of the march was a counter-protestor holding a banner that simply said "Free Speech". She was threatened by marchers, who shouted "Kill, kill, kill!", and only escaped injury due to the intervention of a man she believes was a plain clothes police officer. This was Barbara Smoker, then president of the National Secular Society.

Barbara Smoker was born in 1923 to religious Catholic parents. She was educated at a convent school, where she was known to her classmates as "the saint", as she was so devout. She dreamed of becoming a contemplative nun and would have done so after leaving school had it not been for her mother's insistence that she wait until she was older and World War Two changing her life's course.

Reading Smoker's account of her childhood brings home the fact that (to one born 60 years later) she grew up in a very different era. When she was six years old she contracted scarlet fever and spent several months in hospital quarantine along with two of her sisters. The children in the ward were often treated cruelly. Her three year old sister was told by a nurse that she would be thrown into the hospital sluice if she cried at night. Barbara Smoker relates that one Christmas Eve, she was suddenly moved to the bed nearest the door. She discovered much later that this was the procedure for patients expected to die as it allowed staff to remove the body discreetly. The severity of her illness earned her the best present from the Christmas tree (much to her sister's envy) but she fortunately pulled through.

In 1942 Smoker joined the Women's Royal Naval Service, known as the "wrens". Not one to do things by halves, she then volunteered for overseas service and was stationed in Ceylon (now Sri Lanka). It is at this point that her strong anti-authoritarian streak seems to have emerged. Smoker describes going on unauthorised sightseeing trips with a friend, using a range of ruses to avoid detection and also mentions that she formed an illicit friendship with a "native" officer, despite that being considered the "ultimate sin" for a wren. She was also motivated strongly by conscience, taking the initiative to inform British ships that Japan had surrendered as soon as they heard the news to prevent further bloodshed. The experience taught her that an individual can make a difference.

Exposure to other world views during her time abroad weakened Smoker's religious conviction. Eventually, her faith waned until she concluded that she was no longer a Catholic. However, she never lost her zeal and over the years was involved with a wide range of organisations such as the Ethical Union (now Humanists UK), the Shaw Society, the Voluntary Euthanasia Society (now Dignity in Dying), the Campaign for Nuclear Disarmament and the Committee of 100, an anti-war group founded by Bertrand Russell for activists willing to commit peaceful acts of civil disobedience. She later discovered that she was monitored by the security services during that period.

Barbara Smoker was NSS president from 1971-1996. She describes this as a "life-changing" experience. During her time as president she produced a booklet entitled "Eggs are Not People", which was sent to members of parliament in response to an attempt by Enoch Powell to ban embryonic research. She appeared regularly in the media and also spoke at a number of college Islamic society debates where she was alarmed by the views expressed by students. She notes that when she publicly raised concerns about the position of women and girls in fundamentalist Jewish and Muslim communities, Ken Livingstone accused her of racism and anti-semitism.

The memoir includes a poem by Smoker entitled 'Living Relay', which is about links across time. She writes "Not one alive was living when Dickens held a restless pen – yet as a child I met a man who'd known him. Such a living span takes only two." She finishes with "Yes each has been and each has gone; yet each a torch has handed on."

Smoker is frank about the fact she is coming to the end of her life. However, she has handed over the torches of the causes she represented. She pays tribute to her NSS successors as well as her predecessors. Her memoir teaches us about those who went before us in the secularist movement as well as telling the story of an incredible life spanning nearly a century. She is our link to the secularists of the past.

The memoir shines a light on aspects of Barbara Smoker's life previously unknown to those who know her primarily as a former NSS president. She is the child who almost died on the scarlet fever ward, the devout Catholic teenager and the errant wren. More importantly, she is the seasoned activist who believed that she could make a difference in the world and went out and did it. Today's challenges are different from yesterday's but what we learn from Barbara Smoker's memoir is that the activists of the past were ordinary men and women who worked together to bring about change. We cannot all be heroes but we can do our bit to further the causes we believe in.

Barbara Smoker's My Godforsaken Life: Memoir of a Maverick is published by Thornwick Press (RRP £11.99). Find out more.

Buy the book (also available from the publisher)