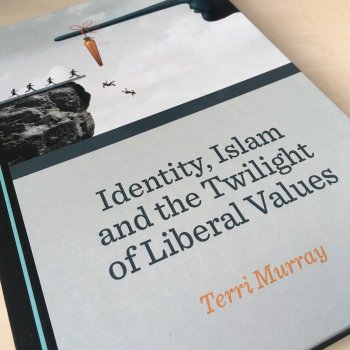 In her book Identity, Islam and the Twilight of Liberal Values, Terri Murray explores attacks on liberalism from the left and right – and the failure to defend it. Here she explains what motivated her to write the book.

In 2017 I had begun blogging regularly for Conatus News, a website that was founded by philosophy graduate Benjamin David to provide a platform for progressive liberal politics as well as commentary on culture, religion, society, science and technology. I was keen to engage some of the changes I saw occurring in Britain's political discourse, because it reminded me of similar 'culture wars' I had seen played out in the United States in the eighties and nineties.

The US culture wars were in large part orchestrated by American religious conservatives who were discontent with the social revolution of the 1960's and its aftermath, which included welfare, affirmative action, greater civil liberties afforded to women, homosexuals and atheists and a greater cultural currency given to liberal academics, intellectuals and media personalities.

A 1994 electoral sweep gave Republicans a majority in both Houses of Congress. The incoming Republican "freshmen" were so far to the right of the New Right that they were dubbed "new Republicans". The backlash against liberals and civil rights organizations like the ACLU was often fought openly, largely through the use of talk radio, cable television and church pulpits as well as through the Republican Party and public policy think tanks like The Heritage Foundation and the Free Congress Foundation.

Social conservatives also exploited the language of civil rights to roll back actual civil rights advancements, such as when a November 1996 California anti-affirmative action initiative, Proposition 209, was misleadingly titled the "California Civil Rights Initiative' (CCRI). Many other far right organisations used similarly misleading language and labels and distorted statistics to sell their regressive politics to a liberal public.

In 2016 and 2017 I began to notice that here in the UK a host of neologisms were being introduced into the political discourse or old terms were being resurrected with completely new referents. Newspeak terms such as 'Islamophobia' were going mainstream. And yet so many of these terms seemed to contain within them unstated assumptions or conclusions that had not been argued for, so that once you treated the words as meaningful, you had already conceded the point.

This peremptory use of words to beg important questions frightened me, because I saw how ill-prepared young liberals were to analyse the many rhetorical ploys and fallacies being flung at them. Because of my background as a teacher of critical reasoning I was able to recognise many of the fallacies being deployed and felt that I could offer the younger generation of liberals some useful analytical tools, but my attempts to cope with the onslaught of misleading language and political posturing left me feeling that I was playing a very intense game of intellectual whack-a-mole. The sheer scale of misleading political spin was truly epic and reminded me of the United States military strategy when invading Iraq, which it called 'shock and awe'. The aim is to paralyse the opponent by bombarding them with such a massive, sustained attack that they will have neither the time nor equanimity to respond.

It seemed to me that so much of what was being peddled as liberal, left-wing policy was in fact eroding key aspects of liberal political philosophy while simultaneously giving inordinate cultural cache to religious conservatives. Again, my background in teaching political ideologies allowed me to discern inconsistencies between the appealing 'liberal' labelling and the regressive contents of these new political 'products'.

The primacy of the individual and the protection of her civil rights was giving way to communitarianism and collectivist social arrangements, which give more importance to social hierarchies that constrain individuals to a subordinate status vis-à-vis cultural traditions and customs. This agenda, however, sounded nice when described as "religious freedom" or "multiculturalism". Where self-appointed community representatives speak on behalf of "the community" as a whole, however, the type of cultural imperialism of which 'the West' stands accused is not avoided but perpetuated and officially sanctioned by Western governments, while also being immunised from criticism. In Britain, many leadership roles from the so-called 'Muslim community' are assumed by ultra-conservative Salafis who do not represent Britain's large secular Muslim constituency but drown its voices.

Tolerance for intellectual dissent and diversity of opinion on moral and social norms was replaced by a totalitarian state-sponsored demand for 'diversity' that replaced the neutral state with a top-down demand to show deference and positive esteem for difference (from the West), with any refusal to do so punished as a thought crime. The new meaning of 'diversity' was the obligatory divergence from Western liberalism and its secularism and a unilateral, rather than reciprocal, demand for tolerance, with each intolerant action against Western targets followed by apologetics explaining why all acts of terror were the inevitable consequence of legitimate grievances against the West and its imperialism.

Moral relativists disseminated the view that moral beliefs that respect self-determination and authoritarian, theocratic or fundamentalist ideologies that do not, are equally legitimate value systems. They rejected 'Western' understandings of ethics and human rights, claiming that there can be no "master discourse" on such matters, while simultaneously assuming that their relativist view on the matter is correct, or at least morally superior to that of their 'Eurocentric' opponents. Colonialism is itself treated as an objective moral evil to the extent that former colonial powers and their heirs should experience guilt and shame, irrespective of their cultural positioning or traditions. Yet this expectation of guilt implies the very kind of objective morality that relativists and pluralists reject and deem impossible.

What if a ship's planks were replaced one at a time while the ship continued to sail? The Ancient Greek philosophers used this hypothetical (they called it the ship of Theseus) to consider whether the new vessel, with an entirely new set of planks, would be the same ship. If the planks substituted for the originals were materially identical in size, shape and type of wood then it seems fair to say that the new ship, while not identical to its predecessor, would still be 'the same make' of ship.

If we use this metaphor to contemplate a political system that replaces all of its core values ('planks') with entirely new 'materials' (principles), then we cannot be talking about the same political system. This is what I believe is currently happening to political liberalism. While many well-meaning and ostensibly 'left-wing' activists fly the prestigious colours of the liberal flag at every port, their Titanic is a ghost of the vessel that set sail in the second half of the 18th century.

Terri Murray, a member of the NSS, has offered members a discounted price of £11.99 (valid until 1 January, 2019). For your copy write to Terri directly at djteryaki@hotmail.co.uk with the words "NSS discount offer" in the subject line.

Dr Terri Murray is an author, blogger and philosophy teacher. She has written for outlets including Conatus News. The views expressed in our blogs are those of the author and may not represent the views of the NSS.