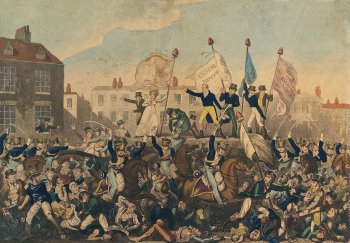 Mike Leigh's keenly anticipated, ambitious and long film, Peterloo, has arrived to mixed reviews. As so often, these reviews reflect more on the reviewers and the audiences they write for than the film itself.

If you are interested in a serious and successful attempt to explore the motivations and errors of those who assembled on St Peter's Field on 16 August 1819, you will find the film rewarding. Leigh explores the reasons the authorities made the grotesque error of letting the Manchester and Salford Yeomanry loose on the crowd. He has done his research and endeavours to record events accurately and fairly and resists the temptation to trivialise and sensationalise.

The film explores the various threads to the reformers' grievances: the injustices of the Corn Laws, a repressive and self-serving government, unemployment, grinding poverty, injustice and a punitive penal system. He also explains the reformers' demands. Freedom, justice and parliamentary reform, including fair representation and universal manhood suffrage. Manchester was not even represented in parliament at the time.

There may be a few surprises too, for example the prominent role of women amongst the reformers and in the background, secularism, that most democratic of causes. My main criticism would be that the film ends rather abruptly and fails to deal with the savage reprisals suffered by reformers.

The secularist theme is developed in a variety of ways. There are the religious justifications used by the authorities to justify their harsh, repressive and authoritarian measures. A stunning example is provided by the Revd. Charles Wicksted Ethelstone (a Manchester magistrate) standing before a painting of the crucifixion advocating extreme measures and fulminating against the "ungodly mob". We also hear Thomas Paine's unattributed words through the mouths of reformers, for example "We have it in our power to begin the world over again".

Most tellingly, in the second half of the film, Richard Carlile appears and introduces himself to "Orator" Henry Hunt, who has been invited as the main speaker. Carlile then travels to St Peter's Field in Hunt's carriage and joins him on the platform. The film ends with Carlile engaged in a conversation about his determination to ensure that people are informed of the "Manchester massacre". This was precisely what he did, returning to London to publish the first account of events in his journal Sherwin's Political Register. When this was banned he carried on in a new journal The Republican. He also published a celebrated engraving depicting the events of 16 August.

Carlile is central to the emergence of a secularist tradition in the UK. It was he who republished Thomas Paine's political and theological words during the repression following the French revolution, hence keeping Paine's democratic and secularist views alive. He advocated a complete separation of church and state and raged against the established church's role in supporting a repressive, undemocratic system of monarchical government. After Peterloo he was tried and spent seven years in Dorchester gaol from where he continued to write and edit his journal The Republican. At one time he was joined by his wife and sister who carried on the bookselling and publishing business. Over 150 shop men and women were imprisoned for selling Carlile's publications.

After he was released he published Every Woman's Book, the first book to advocate birth control and provide practical advice. Incredibly, in the same book he advocated free love on the grounds that Christian morality was repressive of women. It seems that his feminism had been encouraged through witnessing the work of women reformers in Manchester.

Finally Carlile went on to lecture throughout the country (in the days before mass railway transport) and established the first secularist publishing and campaigning organisation. When Charles Bradlaugh founded the NSS in 1866 he was acutely aware of this heritage and adopted the gavel used by Carlile at his meetings as the symbol of office of the NSS president. The gavel remains in the society's possession.

The events of Peterloo are a reminder of the enduring link between secularism and democracy, two causes which seek to balance people's rights to create a fairer society. It is in this tradition that the National Secular Society continues to stand for secular democracy.

Image: Carlile's engraving of the 'Manchester Massacre'. Carlile is shown standing at the far left of the platform. Henry Hunt (hatless) is standing in the centre. Carlile has chosen to show himself standing next to the pioneering feminist Mary Fildes, chair of the Manchester Female Reform Society.

Find out more about the history of British secularism, including Chartism: the Church and establishment.