How cutting cultures deny dissenters their voice and identity 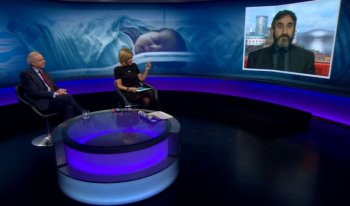 As Icelandic lawmakers consider whether to ban cutting infants' genitals for non-medical reasons, Dr Antony Lempert reflects on the ferocious backlash to the proposal in the UK.

This week non-therapeutic childhood male circumcision has hit the UK headlines like never before. As Icelandic parliamentarians debate whether to ban the procedure the BBC was among outlets which reported it widely.

On Monday morning, Radio 4's Today programme interviewed an imam and an Icelandic politician. On Monday evening I was interviewed on Newsnight, and on Wednesday evening the National Secular Society's CEO was on the Moral Maze, on BBC Radio 4. He faced an intemperate tirade of slurs from a man who had recently procured the cutting of his own child's genitals.

On Newsnight I could have refused to discuss my heritage. Not that I've ever hidden the fact that my parents were Jewish, that I had a Bar mitzvah, that I have been best man at two Jewish weddings and that my own best man used to run a Jewish deli. It's just that I've never thought my parents' choice of belief added to the debate. I could have refused to let Newsnight out me but they clearly wanted to highlight this angle of two apparently Jewish people with different views.

By Jewish standards I am claimed as one of their own, since my mother was Jewish and I had a Bar mitzvah whilst a child; I even have an A level in Classical Hebrew. But then Jonathan Arkush, the President of the Board of Deputies of British Jews, went on to assert that he's never met a Jewish man who would want to reverse the (patently irreversible) procedure.

So there you have it – I also can't be Jewish or this eminent barrister wouldn't have been so foolish as to say such a ridiculous thing in front of me.

It is starting to appear like the Jewish Schrodinger's cat or Schrodinger's penis. I pop in and out of Jewishness depending on the argument that's being used; arguments which are of course conveniently mutually inconsistent.

This demonstrates something that is rarely mentioned among the disputed claims for benefit of belonging and 'imperative to do it young', the absurd claims that it's less painful when one is a baby and the disregard for the evidence of harm and death. That is a complete disregard for the views and bodies of anyone who doesn't later choose to belong to the cutting culture. What Mr Arkush and his acolytes appear to want is for men who stay in the fold to have a voice - as long as they agree with the party line, whilst those who dare to challenge it are to be disregarded. In other words, it really doesn't seem to matter to the cutting communities how many innocents get cut, just so long as those who share their belief get their way.

On the Moral Maze, NSS CEO Stephen Evans and secularists in general were accused of trying to control people and of restricting religious practice. Giles Fraser effectively accused Stephen of dragging up the blood libel - even though he merely talked sensibly about the harm caused to children by cutting their healthy genitals.

Mr Arkush has form, too, in that respect. In 2013 I debated him on this topic at a London University. After the debate a member of the audience asked him his views on child protection workers trying to stop all forms of forced genital cutting. He replied: "The last people who tried to ban circumcision were Hitler and Stalin so that's the company you are in when you try to ban it." I reported this on the Secular Medical Forum website and Mr Arkush threatened to sue me for libel over several weeks for misrepresenting his position. Apparently he was only talking about organisations and not individuals.

Rebecca Steinfeld's work on the child's right to an open future – written eloquently from within the Jewish community – is key here. The child may be guided by parents but should not have avenues of education or physical integrity closed off to them. Discussions about the limits of parental 'direction' or control of children are not new. But one could be forgiven for thinking they are, considering the nature of debate when non-cutters are asked what gives them the right to stop normal healthy adults from cutting healthy functioning body parts off a defenceless infant.

For the record: I am not Jewish - belief is a choice. And names don't hurt people anywhere near as much as cutting off the most sensitive erogenous parts of their bodies in the arrogant assumption that the child will adopt their version of reality and not caring if they don't. The UN Convention on Human Rights asserts that every person has the right to freedom of belief from birth to death. So if an informed adult wants to pay a private surgeon to remove his foreskin he will have every right to do so and it won't be me stopping him.