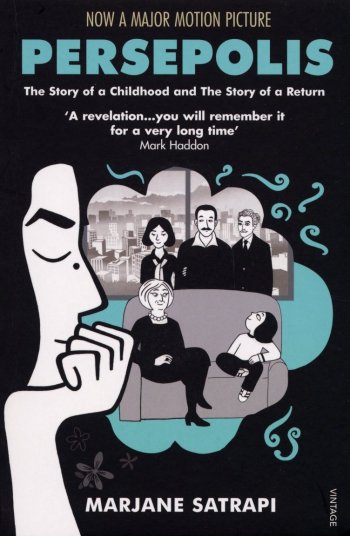 In light of the recent protests in Iran, and the rise of Islamist extremism throughout the world, Megan Manson looks back at the graphic novel Persepolis, published nearly 20 years ago.

If there were ever a perfect time to read Persepolis, it would be now.

First published in 2000, this award-winning graphic novel by Marjane 'Marji' Satrapi tells the author's story of growing up in Iran following the 1979 Islamic revolution, and her later experiences living in Europe. Told in simple, clean illustrations exuding charm and emotion, Persepolis is moving, honest and revealing.

The relevance of Persepolis to today's world is clear right from the very first panel of the opening chapter, entitled 'The Veil'. It shows a 10-year old Marji alongside her school mates, all wearing the veil that has just become compulsory under the revolution. They all look identical, and none of them look happy. We then go on to read that all schools have now become sex-segregated, and that bilingual schools have been closed down.

From then on, things get worse for Marji and her progressive-thinking family as Iran descends into war. Demonstrations are brutally shut down; dissenters jailed, tortured and killed; and 'decadent Western' behaviour like having parties is prohibited. But Marji continues to speak out against the regime, and her family fear for her life. As a result, Mariji's parents send her to Austria at the age of 14.

But although Austria offers greater freedom for Marji, life in a foreign country offers new troubles. The strain of culture shock, adolescence, neglect (her relatives in Austria effectively abandon her) and trauma from her experiences in Iran overwhelm her, and she ends up taking drugs and living on the streets. Eventually she decides to return to Iran where she begins to rebuild her life, going on to study art at university. In 1994, with her parents' encouragement, she leaves Iran for Europe "for good". The final line of book reads: "Freedom has a price".

Persepolis offers a rare insight into life in a theocracy through a young woman's eyes. The oppressive, and often ridiculous, nature of a system governed by strict Islamic law is revealed in key memorable incidents: schoolchildren forced to beat their chests in honour of 'martyrs' to the war, for example, and art students having to learn how to draw human anatomy by sketching a fully veiled woman ("We nevertheless learned to draw drapes," Marji reflects). One quote sums up the reason why theocracies impose such strict control on all aspects of their subjects' lives very neatly:

"The regime had understood that one person leaving her house while asking herself, 'Are my trousers long enough? Is my veil in place? Can my make-up be seen? Are they going to whip me?', no longer asks herself, 'Where is my freedom of thought? Where is my freedom of speech? My life, is it livable? What's going on in political prisons?'

"It's only natural! When we're afraid we lose all sense of analysis and reflection. Our fear paralyses us. Besides, fear has always been the driving force behind all dictators' repression. Showing your hair or putting on makeup logically became acts of rebellion."

But Persepolis is as much a story about an ordinary girl growing up in extraordinary circumstances as it is about political oppression. And what makes it an award-winning book is its humanity. Its moments of sadness and pain are offset by warmth and humour. Marji is no saint; she is a fully-rounded person, who is just as prone to fads, conceits and self-absorption as any other teenager. As a character she will provoke frustration and outrage in the reader as well as laughter and tears. The result is an utterly sincere portrayal of a person that brings the situation in Iran down to the relatable, human level.

With its young protagonist, friendly illustrations and highly readable script, Persepolis is a particularly good read for adolescents as well as adults. With the recent protests in Iran sparking international interest in the country, and with the encroachment of Islamist ideology on life in Western democracies, Persepolis provides much-needed context and commentary on the politics of Iran and theocratic regimes.