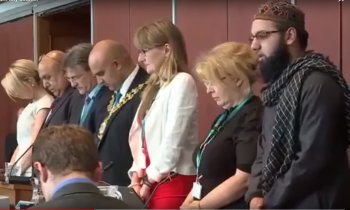 Christian Concern has criticised Oldham council for holding Islamic prayers at its meetings. It links this with an attack on The Local Government (Religious etc. Observances) Act 2015. It says the Act promotes an "inherently unstable" struggle for religious supremacy. Passed at the end of the Coalition parliament, this Act fulfilled a government promise made after the Bideford case, when courts ruled that prayer could not legally be part of a council's agenda.

Religious Right organisations including Christian Concern campaigned to overturn the judgment, demanding permission for councils to put prayer on the agenda. Now Christian Concern worries about Islamic prayers being "alienating to the members of the Council" – just what objectors say about 'Christian' prayer! It is vital that all, regardless of faith, should feel equally at home when taking part in the institutions that serve our democracy.

In my book The Jesus Candidate: Political religion in a secular age (recently reviewed by the NSS) I recall how, as a local councillor and a Christian, I voted against a proposal by a leading Freemason to reinstate prayer at the start of meetings. Using it for ritual in a secular setting devalues prayer, rewards hypocrisy and makes faith a political football. Religious observance threatens to exclude honest people from the public square if they are reluctant to submit.

So why are Religious Right bodies like Christian Concern so keen to promote council prayer, despite obvious discrimination? And why then object when a council chair, who is Muslim, invites an Imam to pray in Arabic? Is this mere hypocrisy? As I show in the Jesus Candidate, Christian Concern follows the American Religious Right in trying to reduce all politics to a struggle for religious supremacy. Its eventual aim is to restore nominally Christian state authority. Exposing and debating the religious identity of politicians is part of its strategy.

People who favour (as I do) a genuinely secular political system, neutral in matters of faith, would like to have the deplorably confused 2015 Act repealed. If praying before meetings is really 'voluntary' then that must be clear in practice as well as theory.

But do we need to think further? The people on my old council who wanted me (as chair) to pray for them at the start of meetings were not really interested in the Christian aspect. They wanted 'formality' – some ceremony to concentrate minds on the business in hand. Should we look for something else to meet this need? If so, can all secularists – including those whose values come foremost from faith – together agree on an affirmation of common purpose for public life in a post-Christian society?

Paul Lusk (@pluslusk) writes on politics, community and housing. The views expressed in this article are those of the author and may not necessarily represent the views of the NSS.