Newcastle: what's faith got to do with it? 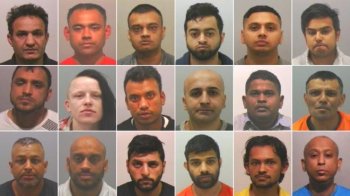 A group of mainly Muslim men has been convicted for sexual abuse in another British city. Amid a predictable response, Yasmin Rehman says child protection does not require the involvement of faith groups or 'community leaders'.

Rotherham, Rochdale, Oxford, Aylesbury, Barking, Peterborough, Telford and now Newcastle. Like many, I listened to the roll call of British cities where yet again, Asian, largely Muslim men have been convicted for the rape, exploitation and abuse of young women and girls.

I listened knowing that more reports of the same abuses taking place in towns and cities across the country are yet to be reported, that thousands of girls have been abused and that men from my community background have been perpetrating these crimes for decades with impunity.

The media and airwaves have been dominated by discussions about the paying of a convicted child sex offender to spy on the grooming gangs in Newcastle. Sarah Champion MP, in a number of media interviews, has demanded the need to acknowledge that the majority of perpetrators, in all of the above cases, are from a Pakistani background and has called for something to be done about this. But what is to be done?

The response of shock and horror at the abuse follows a well-worn path. Calls for more to be done to support survivors of child sexual exploitation, serious case reviews to learn lessons, concerns about the far-right exploiting the situation and feeding anti-Muslim hatred, calls for the Asian community to do more, more debates about integration and cohesion of Asians/Muslims in British society and political correctness. Then there is the letter signed by faith and community leaders to condemn the abuse which also follows news of such cases.

And as always there is the oft-heard statement that these cases have nothing to do with religion - and, at the same time, statements that religion is a key tool in tackling such abuses. Councillor Dipu Apad, a prominent Tyneside Muslim, has stated that the abuse goes against everything Islam stands for; and yet in an interview with Channel 4 News, he called for faith groups to be included in addressing such crimes.

I am never quite sure what role faith has in these debates unless of course faith is being used to justify the abuse of young girls. But even then, irrespective of religion or culture all of us know, including these men, that drugging, plying young girls with alcohol and drugs and sexually assaulting them is simply wrong. 'Do not rape and abuse' is not hard to understand, is it?

It is interesting that in Britain every time there is a case involving Asian/Muslim men there are calls for greater engagement with faith communities and community leaders. This is in stark contrast to what I have been told is happening in Pakistan, where discussions about child sexual abuse are now beginning to take place.

In 2000, Javed Iqbal was sentenced to death for the murder and abuse of more than 100 children. At that time, much of the debate focused on the sentence issued by the judge in the case and not on the abuse. However, the taboo surrounding child sexual abuse was highlighted in a ground breaking drama series Udaari (To Fly), broadcast in 2016, and has finally created a space for public debate about these issues. The drama series was produced by Hum TV in partnership with the Kashf Foundation, an NGO working on gender empowerment and talking poverty in Pakistan.

I was struck by the bravery of all those involved in making Udaari for taking on such a taboo and controversial subject in Pakistan. I know of many courageous activists and NGOs, such as Sahil, working in Pakistan to tackle child sexual abuse and child trafficking. In addition to the courage to work on such abuses in Pakistan, what really struck me about Udaari and these NGOs is that at no point do they suggest or recommend working with faith communities, religious leaders or using faith based education to tackle these crimes.

In contrast, Kashf Foundation, Sahil and others in Pakistan call for politicians and lawmakers to make child protection a priority. They want to raise awareness of child sexual abuse and remove the stigma attached to victims and survivors. They would like to see better funded support for organisations supporting survivors and their families. They want to see the abusers exposed and an end to the impunity under which they can continue to abuse and violate children. And finally, they want to see the police and criminal justice system hold perpetrators to account through the civil laws of the land.

At no point is religion part of this call. This was clearly shown in the television drama and the calls repeated several times by the various characters in the story.

I think there is much that can be learned from the work in Pakistan in addressing the grooming gangs here in Britain. The survivors deserve a response that will deliver justice through conviction of the perpetrators and ongoing support to move forward from their experiences. This will not and cannot be delivered by a religiously sanctioned rejection of child sexual exploitation.