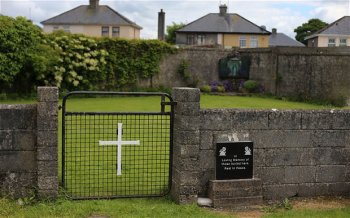 With the latest revelations about human remains in an Irish Mother and Baby home, Keith Porteous Wood, executive director of the National Secular Society, seeks answers about how such atrocities could have happened on such a scale, and what can be done now.

An interim announcement by a Government Commission into eighteen homes, many run by the Catholic Church on behalf of the Irish state, has revealed that the remains of babies and young children have been found at a former Catholic home in Tuam, near the west coast of Ireland in what appeared to be a waste-water or sewage tank. The home took in unmarried mothers between 1925 and 1961 when the children of unmarried parents were, under conservative Catholic teaching, denied baptism and burial in consecrated ground.

On arrival at the home, children were separated from their mothers who were often forced to hand over their children for adoption.

The children were kept in appalling conditions. An Irish Government inspection in 1944 described some of the children at Tuam as "fragile, pot-bellied and emaciated" and the mortality rate far exceeded that in other such homes where the mortality rate was a spine-chilling 17%. In one year alone, according to the National Archives, 31.6% of babies under the age of one in Tuam died. "Debility from birth" and respiratory diseases were the cause of death listed for 40% of the 796 recorded deaths.

It is difficult to comprehend the living hell to which the mothers and children were routinely subjected in a civilised country and in living memory. If the facts are as alleged and widely believed, the depths of inhuman institutional depravity thrived in Tuam, which was practically a death camp operating under the guise of being a place of piety and refuge. There is a strong suspicion that there may be other such places yet to be discovered.

In early 2014 historian Catherine Corless published the catalogue of the 800 deaths, convinced that the bodies would be in the septic tanks in the grounds. While the place of burial was recorded as being in specific graves for a very few, it was not for the vast majority. Disturbing questions arise as to why the place of burial was not recorded for the remainder.

The Catholic League website acknowledges that around twenty bodies had been seen in a tank in the Home's grounds in the 1970s but evidently does not consider that 20 skeletons constitutes a mass grave. The League fulminates even now: "Mass graves. …. It is all a lie. It's about time this non-stop assault on truth and the Catholic Church stopped before no one believes anything the media tell us anymore about all matters Catholic." There remains doubt however whether these sightings, made by children exploring in 1970, were of all of the burial area; Corless found a second "continuation" site in 2014. No other burials sites, individual or mass, have been found for the remaining bodies.

The Corless findings were published widely including by the Daily Mail, CNN and AFP. Later in 2014 a French documentary maker for France 2 approached the Bon Secours sisters who ran the home - its headquarters are in Paris. She was told by their PR company that "you'll find no mass grave, no evidence that children were ever so buried", and a local police force saying sceptically "Yeah a few bones were found, but this was an area where famine victims were buried. So?" The PR company defended themselves by saying there was "absolutely no difference" between the substance of what they had said, and public pronouncements made by the Bon Secours sisters.

It wasn't quite made clear why victims of a mid-nineteenth-century famine would be found in a septic tanks with concrete covers.

Even after the latest revelations, the PR company initially refused to talk to the Irish Times, however the PR company belatedly acknowledges that "Nobody expected the kind of numbers that are being revealed today. Clearly there was extensive burial".

Rather than respectfully accept it had made the blunder of all blunders – assuming it was a blunder – the PR company could not resist seeking to dig itself out by tastelessly deflecting attention and changing the subject. By doing so it brazenly dug itself in yet deeper. It asked whether the number of children who died was "disproportionate to the number of children and toddlers who would have been dying in the ordinary population at this time?" It was. "And one other thing, what did they die of? Was it malnutrition, was it lack of care? What was it that killed the children?"

Forget reparations, I have yet to see the Bon Secours sisters or their PR advisers express the slightest remorse or even apology this litany of inhumanity. Bon Secours ignored formal approaches last year from our French sister organisation Libre Pensee and, similarly, on the pretext of the records having been handed over to Galway County Council, they made "no comment on today's announcement, other than to confirm our continued cooperation with and support for the work of the Commission in seeking the truth about the home". Had they refused to co-operate it would have stoked the media storm.

The tragedy is compounded by there being little realistic prospect of any individuals being held to account for this criminally or civilly; apparently no one left who was involved is capable of giving evidence.

According to an Irish Times article in March 2017 entitled "Nun lying 'through her teeth' about Tuam home, court hears" it states that "Following long investigations concerning indemnities to be given, those records were handed over…". I hope the state will investigate whether, much more recently, the nuns extracted indemnities in exchange for releasing information about the homes, and if so who gave them, why, with what authority, how binding they are and what legal remedies there may be.

But even that may not be as straightforward as it sounds; the article continues with a solicitor's claim that "[The Irish Government's Child and Family Agency] 'has sat on [the records]'".

Might Bon Secours itself yet pay a penalty for their alleged treachery to the children entrusted to their care, and for which they were paid? Bríd Smith TD (MP) looks as if she will do her best to make this happen. She accused the Bon Secour nuns of a "massive cover-up" of "criminal activity" which they had denied for many years. "Bon Secour now run, and make lucrative profits from two private hospitals. … They are a very wealthy organisation." "The order itself should be disbanded and their assets handed over to the State", she told a news conference; she is keen for these hospitals to serve the vulnerable in the community rather than those who can afford to pay.

Tuam is just one of the 18 homes being inspected, and Paul Redmond, chairperson of the Coalition of Mother and Baby Home Survivors said that he expects the commission of investigation to ascertain that between 7,000 and 8,000 babies died in homes in Ireland from the 1920s up until the 60s. There are thought to have been 180 such institutions.

As well as the Bon Secours sisters, the Magdalene Laundries were another arm of the Catholic Church operating also in Scotland, but in some cases these were "non-denominational" (Protestant) establishments. All were for women considered undesirable, not only unmarried mothers but traveller women who looked after their children well. These institutions were forced labour camps which the UN harshly criticised in 2014 – please see paras 37 and 38. There are also references to mass Magdalene Laundries graves here and a recent call in the Irish Times for redevelopments of two Magdalene Laundry sites in Dublin to be postponed until they have been searched for children's remains. A survivors' organisation has names of 1,600 who are thought to have died in the laundries, although the names of many were unknown; the women were stripped even of their names when entering the Laundries. In the largest one, High Park, a grave with 155 bodies was found solely because the nuns sold off laundry land to a property developer when a speculative stock market investment they had made went wrong. They had lost count of how many bodies were there and a third of the bodies were uncertified.

It is not the fault of children to be born out of marriage. Yet the message inherent in an official Catholic doctrine denying them a proper burial in an overwhelmingly Catholic country is that they do not deserve to be treated as humans. And these children appear to have been treated in ways that it would today be illegal to treat animals.

The other victims of these institutions were mostly unmarried pregnant women, with the fathers going almost entirely unpunished. Largely because of Catholic proscription, contraception remained illegal until 1980 and abortion still is. Only those able to afford to travel abroad could benefit from a safe legal abortion.

The level of reported clerical (almost entirely Catholic) child abuse in Ireland is the highest in the world. Being such a small island and largely rural, it seems inconceivable that cruelty in these homes and of clerical child abuse on such an industrial scale could have occurred for so long without being known to many people. While the reputation for friendliness of the Irish is undoubted, this may have been compromised by the legendary depth of Irish piety, and potential whistleblowers will have been unwilling to risk the religious threats for causing scandal to the Church. Could it be that the extent of that piety and threats of retribution allowed the patriarchal and in many respects misogynistic Church to do absolutely anything it wanted, particularly when it in effect controlled the government too? That is the very antithesis of secularism.