What do pupils need to know about religion? 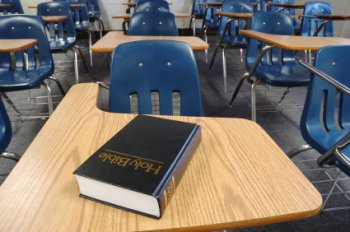 In recent years faith communities have amplified their demands for a better understanding of religion in the private and public sector. But what do pupils need to know about religion by the time they leave school?

In recent years faith communities have amplified their demands for a better understanding of religion in the private and public sector.

It is argued that a range of concerns from global conflict, to minor workplace religious spats and religious intolerance, can all be remedied with lessons in "religious literacy". For some it's also a remedy for the public's growing indifference towards religion and its reluctance to accommodate increasing religious demands. One of its earliest and keenest advocates was Tony Blair, who argues that religious literacy is a "vital skill" in a globalised and multicultural society.

Religious education is a confused subject in search of a purpose, and the engineered moral panic over religious literacy is providing a narrative for those seeking to justify the retention of religious education, or elevate its status, on the school curriculum.

In a new report on the subject, the All-Party Parliamentary group on Religious Education calls for a return of the 'minister for faith' position to the cabinet in order to address society's urgent need for greater "religious literacy".

Without providing any evidence that religious illiteracy is a problem of any significant importance, the APPG calls on the Government to promote religious literacy by "championing RE" and making its improvement an "important educational priority".

The problem is, when it comes to this highly contested area of the curriculum, there's very little in the way of consensus regarding what "improvement" actually means.

Religious education evolved out of religious schooling and has been part of the school curriculum since the Elementary Education Act 1870. The Education Act 1944 established religious instruction as a compulsory subject in order to "lay the basis for a morally stable society rooted in its common Christian heritage".

To this day, largely due to undue religious influence, this quasi-academic subject hasn't been able to shake off this legacy, and as a result its reputation has been severely damaged and the subject marginalised – treated by many as an irrelevance.

Making a brief appearance at the recent inaugural Youth Debate in Parliament on the role of religious education in schools, the (since dismissed) Education secretary Nicky Morgan described RE as "one of the hottest potatoes for a Secretary of State to handle". And therein lies the problem.

Faith schools account for a third of all state schools – making organised religion an incredibly powerful lobby within education. This lobby vigorously defends RE and stands in the way of a fundamental rethink about the way religion and belief is approached in schools. It's directly down to the influence of organised religion that schools are still required to provide worship and faith schools are still permitted to teach only about their own religion in RE – undermining young people's rights and any academic credibility the subject may otherwise have. Students' learning in this area must be undertaken with a critical and sophisticated analytical lens.

The students attending the before-mentioned debate seemed pretty clear in their own minds that RE certainly shouldn't be about faith formation or indoctrination – but about giving all students a basic understanding of religious and non-religious worldviews and their roles in human experience.

I wouldn't argue with that, but I do question whether this demands a specific subject, spanning the entirety of a pupil's education, dedicated to religion.

I'm all in favour of equipping young people with an appropriate level of knowledge and skills to engage effectively with religion and belief issues. But there's no reason why this should take place within the confines of a subject called 'religious education'. It could perhaps become a constituent part of another area of the curriculum, or perhaps we need a brand new Civics-style subject that covers a broad range of religious, nonreligious and philosophical worldviews?

Pupils' exploration of morality and ethics certainly shouldn't be carried out in an exclusively religious context. This is dishonest, divisive and risks failing to recognise the many overlapping values that both religious and non-religious people share.

A broad intercultural education will benefit young people and help them to challenge the sort of ignorance and bigotry that seems rampant in Britain right now, but the in-depth study of particular religions should be regarded as a parental or individual's responsibility, not the responsibility of state primary and secondary education.

So let's not blindly accept the premise that religious literacy is necessary pre-condition for a peaceful and tolerant society. Civility, a clear sense of citizenship and a respect for Human Rights are the values that nurture a more harmonious society – and these values should be should be promoted throughout state education.

Self-serving calls for more religion in schools also run the risk of eclipsing other educational priorities that don't have well-funded and well organised lobby groups fighting their corner.

Philosophy offers a way to open up children's learning through enquiry and the exploration of ideas but hardly gets a look in in schools. A petition to parliament calling for young people in Britain to be educated in politics and international relations has attracted almost 30,000 signatures– and given the shocking level of debate during the recent referendum campaign – it could be argued that this will do more to benefit young people and the Britain they'll inherit than anything they'll learn in Religious Studies.

So let's hope the new education secretary Justine Greening will be a little more willing to handle the hot potato of RE than her predecessor was. But given the unhealthy close relationship between churches and state that still persists, particularly within the Department for Education, I wouldn't hold your breath.

Stephen Evans is the campaigns director of the National Secular Society. The views expressed in our blogs are those of the author and may not represent the views of the NSS.