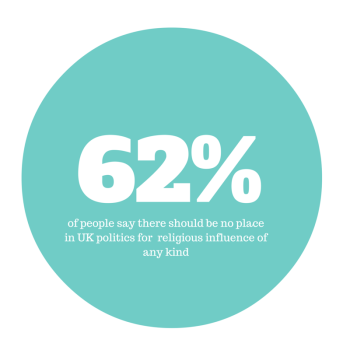 A ComRes poll commissioned by the Ahmadiyya Muslim Youth Association has found broad support for separating religion and politics – but while the followers of most religions are happy to embrace secular ideals to some degree, most Muslims are not.

Unsurprisingly, support for the separation of religion and politics was very high among those with no religion, and 73% of the 'nones' agreed with the statement "There is no place in UK politics for religious influence of any kind".

Support for this separation among the followers of all religions, except Islam, was strong. The most secular group of all, including 'nones', were Jews, of whom 79% agreed with the statement, though for minority faiths the poll sizes were small.

56% of 1,039 Christians, the largest sample in the survey, agreed that religion shouldn't influence politics. Just 8% of Christians strongly disagreed.

Depending on the religion of those polled, support for separating religion and politics varied from a low of 31% to a high of 79%. Islam, by far, was the outlier. Muslims were the only group in the poll without a clear majority in favour of separating politics from religion.

Though 15% of British Muslims did "strongly agree" with the principle and a further 16% tended to agree, 36% either strongly disagreed or tended to disagree. The Muslims polled were also most likely to say they didn't know.

The poll only included 44 Muslims, but it can't be written off on that basis alone; it points to a lack of political secularity that is obvious in every poll like this.

The response from this relatively small sample size matches other surveys of Muslim opinion, most recently the ICM poll fronted by Trevor Phillips which found that, inter alia, 78% of British Muslims think there should be no right to publish images of Mohammed and that 52% think homosexuality should be illegal.

While followers of other religions in the UK and the 'nones' are in broad agreement that, in principle, religion shouldn't dictate politics (whatever that might mean in practice), these polls and many others indicate that this view is not at all common among British Muslims.

With an approximate doubling of the Muslim population every ten years, fuelled by immigration and a high birth rate, the Islamic failure to de-couple faith and governance poses, in decades to come, an existential threat to the broad secular values which are held across religious and non-religious divides.

Given this, it is unsurprising that most Britons polled in the same survey said that Islam is not compatible with 'British values'.

However, just under one-third of British Muslims believe politics should be free from religious interference. This demonstrates that it is possible to be a secular Muslim in Britain today. Everything must be done to increase that percentage.

In the meantime, Christians, those of minority faiths and no religion all have a growing interest in defending secular principles.

Benjamin Jones is the communications officer of the National Secular Society. Follow him on Twitter @BenJones1707. The views expressed in our blogs are those of the author and may not represent the views of the NSS.