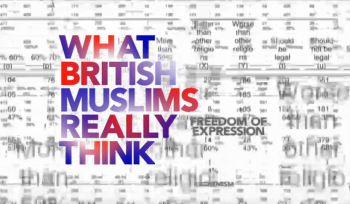 The ICM poll on 'What British Muslims Really Think' shows clearly that widespread support for Islamic theocracy, not terrorism, is the real, long-term threat to British society, argues Benjamin Jones.

Much of the discussion about the "What British Muslims Really Think" ICM poll, presented for Channel 4 by Trevor Phillips, has revolved around how many British Muslims sympathise with or support terrorism – but this is far from the greatest danger.

While 4% are willing to admit to having some sympathy with suicide bombers (more than 100,000 people if the poll is perfectly representative) and only 34% would report a friend who supported terrorism overseas, the real, existential threat to any kind of cohesive society is not from violent extremism. Terrorism poses no existential threat to the Western nation state, whereas a splintered society undermines the legitimacy of the state. Unless struggled with now this situation will be insoluble.

23% of British Muslims would support the imposition of sharia law in the UK, but more than half would impose their religion on the rest of society by criminalising same-sex relationships. Nearly half think gay teachers shouldn't educate their children. 78% say there should be no right to publish images of Mohammed. As many British Muslims support the right to publish pictures of Mohammed (including non-critical, inoffensive ones) as sympathise with suicide bombers: 4%.

Muslims have an incredibly young age profile, the Muslim population is growing rapidly – nearly doubling in ten years, and Islam is passed on with a very high rate of success from parents to children. What's more, while younger Muslims are slightly less likely to want to criminalise homosexuality than older Muslims, a vast number of British Muslims are clearly still in thrall to these innately illiberal and theocratic ideas.

In 2009 a poll came out which found that there was "zero tolerance" of homosexuality among British Muslims. That poll was asking about the morality of homosexuality. It could have been hoped (however naively) that respondents held illiberal views, but wouldn't impose them on society – that they thought homosexuality morally wrong, but that they wouldn't criminalise it. But the 52% figures blows that argument out of the water and Trevor Phillips has now admitted what has been obvious to many people for years; that Islam isn't just 'another religion'.

The left-wing media have been trampling over each-other to denounce the latest poll. The Guardian used an interview with five British Muslims to argue that the poll of 1000 British Muslims was unrepresentative, and there has been endless commentary in this vein about the methodology.

If a poll of 1000 UKIP members had found majority support for criminalising homosexuality, would anybody on the left be quibbling about the methodology of the poll? If poll after poll kept suggesting that a sizeable block of UKIP's 3.8 million supporters wanted to ban homosexuality, it is inconceivable that this would not be a cause for serious concern and scrutiny. The criticism would be totally unrestrained.

Even if there was a gigantic margin of error of 20% in the ICM poll, that could still leave one-in-three supporting criminalising homosexuality. So whether the poll is perfectly accurate and transferrable to the entire British Muslim population is totally irrelevant. Whatever the exact figure, there is an extraordinary split in values, and there is a "chasm" in our society.

Most British Muslims feel British. Great. But would anybody else want to live in a Britain governed by the values and beliefs of the Muslim majority found in this poll?

The 52% figure represents a significant rejection of liberalism, and the nucleus of support for rule by religion.

The danger isn't from suicide bombers, but from this mass of support that exists for fundamentally changing what Britain means.

It has taken centuries to make Britain what it is today. All of that progress is reversible. There is nothing that ordains or guarantees progress, stability, social cohesion or order. There can be no social contract if a sizeable section of society believe the state should enforce their moral preferences.

There is no single solution to any of this. But action can be taken. Councils need to stop making excuses and start doing the work to identify illegal religious schools. Those institutions need to be shut down. Legal independent schools should face rigorous inspections. There should be no hiding place for bigotry or separatism in the independent schools sector. The Government should (at a minimum) put a moratorium in place on new state-funded faith schools.

Trevor Phillips offered some partial suggestions about breaking up ethnic segregation in schools, but why would any non-Muslim want to send their child to an Islamic faith school? Diversity cannot exist in schools designed around one religious ethos to the exclusion of all others. We cannot continue with a faith-segregated education system.

Politicians must stop paying lip-service to integration and actually start doing the things necessary to promote it.

We can't afford to be naive or unduly optimistic about the strength or influence of reforming voices within Islam: The torrent of abuse, death threats and murders faced by 'heretics' within British Islam keeps many would-be allies of this project silenced. They need the support of wider society, however it can be offered. And ex-Muslims must finally be listened to by those on the left who have ignored and silenced them.

If there is to be an 'us' versus 'them', it must not be between Muslims and non-Muslims, but the secularists of all religions and none against those who would impose Islam by violence or political means on others.

Society needs to set a much higher standard than simply 'feeling British' and being 'peaceful'. Almost all British Muslims meet this standard; yet many more live in fear of expressing more liberal views than this. This, not the battle against terrorism, is the real generational struggle.

Benjamin Jones is the communications officer of the National Secular Society. Follow him on Twitter: @BenJones1707. The views expressed in our blogs are those of the author and may not represent the views of the NSS.