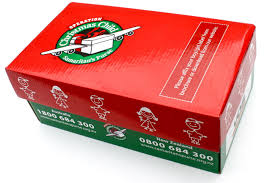 The Operation Christmas Child 'shoebox' appeal is a front for a project to convert children in predominantly Muslim countries to literalist Christianity. Parents should give it a wide berth, argues Stephen Evans.

My heart sank this week when picking my daughter up from Rainbows I found the group leader cajoling kids into going out and buying cheap plastic trinkets to stuff into shoeboxes as part of the Operation Christmas Child 'shoebox' appeal.

The project is run by Samaritan's Purse, an evangelical international relief and development organisation that combines delivering aid with "sharing the Good News of Jesus Christ".

The scheme involves thousands of churches, schools and youth groups sending shoeboxes stuffed with toys (with gender-segregated labels) to children all over the world (primarily targeting countries with large Muslim populations) for Christmas – all in the name of Jesus.

The gift wrapped shoeboxes are then used for proselytise a particularly unpleasant brand of biblical literalism. Toys are accompanied by promotional, conversion focused literature to invite the children receiving it to follow up Bible studies. But those promoting the scheme, including schools, often aren't at all upfront about this – meaning children and parents up and down the country are unwittingly being used as foot soldiers for a fundamentalist child evangelism project.

Other aid-based development charities have criticised the shoebox scheme as a poor way to give aid. However well-meaning supporters of such schemes are, the scheme's inefficient way of making charitable donations, doesn't meet local needs, help solve local problems, and can in fact disrupt and harm the livelihood of local vendors.

Brendan Paddy of Save the Children, when referring to OCC, said "it is dangerous when charities mix humanitarian work with the promotion of a particular religious or political agenda". He said it was particularly important for aid agencies to preserve neutrality. Christians too have spoken out against the scheme's toxic agenda.

But despite not being either an ethical or efficient way of providing overseas aid, the scheme is popular with those working with children because on the face it looks like such warm and fluffy feel-good thing to do. So much so that it feels churlish to criticise. But parents and educators should be aware of this organisation's dark underbelly.

The President of Samaritan's Purse is Franklin Graham, the controversial American missionary and a hard-line Christian fundamentalist. Graham recently praised Vladimir Putin's support for harsh and discriminatory anti-gay laws and claimed that homosexuals "take people's children". Graham has called on Christians to convert Muslims to Christianity and recently suggested "all Muslims should be barred from immigrating to America and treated like the Japanese and Germans during World War II".

Armed with this this knowledge I hope churches, schools and organisations such as Girlguides and the Scouts will give Samaritan's Purse a suitably wide berth.

Walking home from Rainbows this week I was left having to explain to my 5 year-old daughter why we won't be filling a shoebox. After discussing the issue with the guide leader, she agreed to reconsider their support for the scheme and undertook to explain to the guides that different people give in different ways – and so instead of filling a shoebox with toys we'll be donating a goat to a family in Africa.

Yes, I know I've fallen into the trap of feeling the need to 'out-good' the do-gooders, but my daughter had to be placated and at least a goat is more useful that cheap plastic trinkets and a 12-week Bible-based 'discipleship programme'.

UPDATE: Since writing the blog Girlguiding UK has send me the following statement:

"As an organisation our official stance is that Girlguiding does not support the Samaritan's Purse Operation Christmas Child initiative and is not encouraging groups to support this or any other any specific charitable initiatives during the festive period. Girlguiding groups around the UK often fundraise and support local or national charities that are important to the girls. There is an expectation that all the activities of Girlguiding groups are rooted in our charity values, which are: inclusive, fun, caring, empowering, challenging and inspiring."