The encroachment of reactionary Islamism in academic life 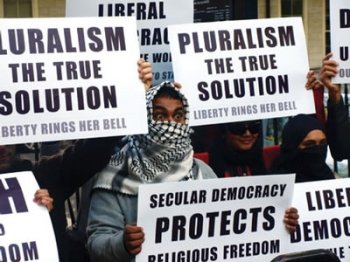 Professor Max Farrar, a well-known British sociologist, recently articulated a very convincing critique of CAGE, a British group working with former Guantanamo Bay detainees and campaigning against the war on terror, which drew fire from hard-liner leftists, Islamists and CAGE's intellectual associates at the University of Bath. Farrar is also a long-standing activist in ethnic minority, anti-racism and inter-faith circles and those who know him will find the accusations that he perpetuates state racism very bizarre.

Among the respondents to Farrar's piece is Professor David Miller, a close intellectual associate of CAGE. Miller has a penchant for the Muslim Brotherhood and a dislike for power. If his work does not represent that sort of ideologically free scholarship toward which academics should aspire, Miller has nevertheless made a contribution in highlighting the social and cultural hostilities faced by many Western Muslims and the ways in which counter-terrorism policies have often ended up marginalising British Muslim communities.

However, we should all be more reflexive about whether academic work in the field has seriously contributed toward better policies or, on the contrary, whether it has only reinforced a patronising culture of victimhood that is detrimental to British Muslims. Dangerously, such a culture of victimhood can fall prey to reactionary Islamists who wish to make a case for the establishment of totalitarian societies premised upon non-negotiable divine laws. Between the 'covenant of security' and long-standing British tolerance for radicalism are the dangers posed by shaping fringe views into absolute truths.

What some have termed the 'Islamophobia industry' is double faced. On one side are anti-Muslim bigots and the racist far right who blame Muslims for all of society's malaises. On the other side are reactionary Islamists and a section of the reactionary left who have exploited real and imagined Muslim grievances for their own political reasons and vested interests. In today's very delicate and fractured geopolitical context, we should all be very reluctant of mainstreaming either of these two sides.

While there is much to be applauded about discussing anti-Muslim prejudice and misguided counter-terrorism measures, actively endorsing a reactionary Islamist organisation and presenting it as representative of Muslim voices is disingenuous at best and dishonest at worst.

The University of Bath's promotion of CAGE as a 'human rights champion' can hardly be taken seriously. Even Lord Carlile QC (the former independent reviewer of anti-terrorism legislation in the UK) raised serious concerns about the group. People working or volunteering for CAGE have a record of failing to condemn female genital mutilation and the stoning to death of women for adulterous behaviour, openly endorsing jihad at Hizb ut-Tahrir rallies, associating with Moussa Zemmouri (a man with close links to jihadists) and massaging the history of Anwar al-Awlaki, a key inspirational figure behind numerous terrorist attacks and a strong believer that non-Muslims should never be trusted.

In June this year, the University of Bath welcomed CAGE at a conference entitled 'Understanding Conflict'. CAGE's work was defined 'invaluable' by American author and journalist Max Blumenthal, while Professor Deepa Kumar (Rutgers University) argued that ex-Muslims should better be defined 'New McCarthyites'. Dissent is certainly a key component of any democratic society but we should be very wary of the ways in which it can easily take the shape of propaganda campaigns.

Although academics should encourage a diverse range of views to be expressed on campus, there must to be limits to the cultural relativism propounded by a section of social scientists, who often mask politics and ideology under the guise of quasi-academic scholarship. Academic tolerance toward a reactionary Islamist organisation is all too ironic given how quickly British scholars acted in driving Professor Tim Hunt, a Nobel Laureate, out of his job at University College London for a sexist comment. Similarly, academics joined forces to demand that Dr Bob Lambert, a counter-terrorism lecturer at London Metropolitan University and St Andrews University, be sacked for conducting controversial, state-endorsed activities as part of his previous work in an elite secret police unit.

The encroachment of reactionary Islamism within British academic circles is set to reach a new high in October, when Glasgow will host a 'landmark summit to examine the scale of prejudice faced by the country's Muslims' at which academics from Edinburgh and Newcastle Universities are expected to share a platform with CAGE's Director Moazzam Begg. The conference is organised by Amina Muslim Women's Resource Centre, a well-respected group providing services to Muslim women, challenging stereotypes and opposing violence.

It is unclear what value CAGE can add to understanding and solving specific problems of discrimination in Scotland. It is even less clear when exactly CAGE became a defender of women rights, especially in light of Asif Qureshi's evasive answers about stoning adulterous women to death and female genital mutilation.

Mainstreaming reactionary Islamists to challenge anti-Muslim bigotry is as absurd as allying with anti-Muslim bigots to challenge reactionary Islamism. There are moderate, sensible Muslim organisations, for example Dialogue Society, which are equally concerned about anti-Muslim sentiments in the West and which channel their efforts through laudable initiatives aimed at fostering interfaith dialogue and intercultural unity. These are organisations that have a long-standing record of engaging with a wide section of the general public across the ethnic and religious (including non-religious) spectra and which possess the credibility and the intellectual tools to challenge Muslim intolerance without, at the same time, fuelling intercommunity tensions.

It is extremely naïve of anti-racist academics and organisations in the West to believe that they will reduce intolerance against Muslims by siding with the most reactionary elements of the Muslim community. These are unrepresentative elements who are listened to only by a fringe section of the Muslim community. While their causes should not be too hastily dismissed, they certainly lack any credibility among the general public and, particularly, among those who hold anti-Muslim sentiments.

In a country, Scotland, where racist groups have not taken a foothold as they have in England, sharing a platform with reactionary Islamists is only going to play into the hands of both those who wish to extend the reach of anti-Muslim sentiments and those who want to fuel anti-Western rhetoric. This is going to be a major faux pas that can severely tarnish the reputation of any serious academic.

There are areas of concern among Scottish Muslims – and these require a concerted effort from all sections of the public. Equally, discussions on such crucial topics must be based on sound arguments and evidence rather than ideology, politics and emotions.

After the National Union of Students made the questionable decision of backing up CAGE and of strengthening such ties with a series of upcoming anti-counter terrorism events, it is crucial that universities support Muslim human rights through genuinely open-minded organisations that aim to bring communities together, rather than creating further social and cultural rifts. CAGE and its affiliates have every right to express their views, as long as such views fall within the remits of the law, but the academic enterprise should rest upon rigorous scholarship and should remain entirely free from the interference of reactionary politics.

Stefano Bonino is a Lecturer in Criminology in the Department of Social Sciences at Northumbria University. He has conducted extensive research on the impact of counter-terrorism measures on British Muslims and on issues around identity, integration and community cohesion. The views expressed in this article are those of the author and do not necessarily represent those of the NSS.