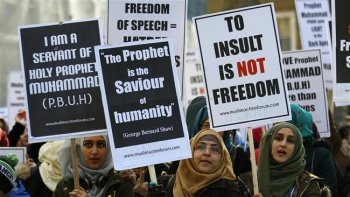 Recent polling found that 56% of Britons think Islam poses a threat to democracy. However this finding has been misrepresented to suggest that British people think Muslims themselves are a "threat".

When asked, "does Islam (not fundamentalist groups) pose a threat to Western liberal democracy?" 27% of British adults said the faith posed a "major threat" and 29% a "minor threat". 20% of respondents said it posed "not much threat" while just 15% said it posed "no threat at all." Unsurprisingly, there has been a substantial increase over the past fifteen years in those who perceive some level of threat to be posed by Islam to democratic societies.

I have reproduced the exact wording of the question above to contrast it with how it was reported: the Huffington Post reproduced the poll (which they commissioned from YouGov) under the headline: "7/7 Bombings Anniversary Poll Shows More Than Half Of Britons See Muslims As A Threat" (my emphasis).

An article by Mehdi Hasan on the topic of the poll carried a photo of a young Muslim boy at the top with the caption, "Have you ever paused to consider how a young Muslim schoolboy might react to polls suggesting his fellow Brits think he 'creates problems'?" (again my emphasis).

In the article Hasan reports turning to a Muslim friend after 7/7 and saying that Muslims in Britain were "screwed." Hasan says that Muslims were "demonised" after the attacks and undeniably many Muslims have faced suspicion and hostility, and violence, in the past ten years. Although Hasan probably isn't the best character to complain about demonising whole groups of people: some years after 7/7 he was recorded calling non-Muslims people who "live their lives as animals".

He writes: "The London bombings, in fact, opened the floodgates to what has become a familiar litany of condemnation and demonisation: honour killings, sharia law, halal slaughter, FGM, gender segregation, the face veil, child sex grooming." Objecting to young girls having their genitals hacked off, he implies here, is part of a pattern of "demonization" of Muslims.

The papers have been replete with Muslims young and old this week complaining of 'demonization' in the wake of 7/7. Likewise, Baroness Warsi among others has been arguing particularly loudly of late that the Muslim community is alienated.

How does it help society become more integrated, and for Muslims in particular to become (and feel) more integrated into society if a well-known Muslim journalist like Mehdi Hasan misrepresents British public opinion and makes out that a majority of British people regard a Muslim child as a "threat", when the poll was about views on a set of ideas, an ideology?

It cannot be repeated often enough that fears about Islam are not equivalent to bigotry toward Muslims. The distinction needs repeating because almost any utterance on this topic will be distorted by someone. The NSS recently posted a link to the poll, with no commentary from ourselves, on our Facebook page and one commenter responded by comparing us to Britain First and said just posting the poll 'demonised' minorities.

What about the substance of the poll? Is it fair to say Islam is a "threat"? Most Islamic countries are authoritarian, anti-secular to at least some degree and many are constitutionally theocratic. On women's rights, apostasy laws, rights for religious minorities and homosexuals, Islam in government has an appalling record. Might the reasonable observer speculate that the common theme is connected with the fundamentals of Islam in some way, and not just with Islamic fundamentalists?

I think there are some very obvious and self-evident reasons to regard Islam, prima facie, as a threat to democratic government; but this is entirely different from saying that Muslims constitute a "problem". Reporting the poll as though it reflected sentiments about Muslim people (and children) is hugely irresponsible, and feeds the narrative that Muslims are alienated and distinct from 'mainstream' society. This becomes self-fulfilling.

We've spent most of the past two weeks since the Tunisia massacre pitifully debating whether to use the English or the Arabic translation of 'Islamic State in Iraq and the Levant'. Language does matter, but the real distortion is not in the term "Islamic State", but the widespread (probably unstoppable) conflation between Muslims and the name of their belief system.

In the commentary around the poll, as with the term 'Islamophobia', the battle for language may already be lost: 'Islamophobia' has entered widespread usage, the conflation is seemingly complete. Islamists and their bedfellows on the so-called 'left' have masterfully normalised this linguistic association.

This makes it so much easier for anti-secularists next time there is a big push for a 'defamation of religion' or other de facto blasphemy law; because many will have already absorbed a sense that 'Islamophobia' is bad and bigoted, and therefore anything 'Islamophobic' should be opposed. The charge of 'Islamophobia' was already enough for gangs to carry-on with the industrial-scale rape of young girls without complaint from the 'authorities'.

This is why the language is so important, and why it should be a cause for such deep suspicion when people like Mehdi Hasan deliberately conflate 'Muslim' with 'Islam'. Whether wilfully complicit or not, there is an agenda behind it. Why else would 'Islamophobia' be the term of choice? It is a deliberate invention and invocation.

Finally, it is not illegitimate to worry that the striking growth in the Muslim population in the UK may provide a platform for Islamists to make a much bigger push for de facto blasphemy laws in the near future. In the far future, if present trends continue (a big if), Islamisation will be a real concern. This isn't a word that should be limited to nutty far-right groups either; the taxpayer is already funding Islamic state schools.

One must be precise with what is meant by "Islamisation." History shows us time and time again, as with the Bolshevik wing of the RSDLP, that it doesn't take a large majority or mass movement to fundamentally change a society. A small, politically-aware 'vanguard' can achieve this on their own, if empowered by a permissive or otherwise inert society: Islamists are already attempting to do this, always 'in the name of' the world's '1.6 billion Muslims'. Muslim people are not to blame for terrorism, but they have a vital role to play in the future in preventing an Islamist agenda being enacted in their name, whether that agenda is enforced with bombs and bullets in our present, or at the ballot box in some grim future.