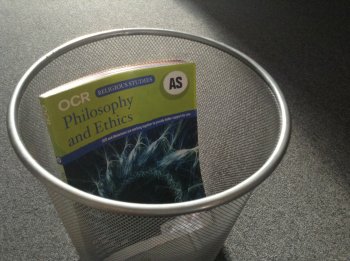 The Department for Education is currently consulting on its proposed subject content for religious studies GCSE and A level, which will be introduced from September 2016.

Somewhat predictably, in drafting the content, it's abundantly clear that too much emphasis has again been placed on conciliating religious organisations, rather than honestly assessing how religion and belief education is best packaged for young people growing up in 21st century Britain.

This was evident right from the outset, with the DfE's press release to launch the consultation leading with the headline: "New academically rigorous RS GCSE backed by faith groups". The press release went on to list endorsements of the new subject content from a host of religious organisations. Given their constant involvement in drafting the content, their support is hardly surprising.

According to the DfE, the reforms will enable all students to receive "well-rounded education" and equip them with a "thorough grounding in religion, religions and belief."

Unfortunately, the reforms simply don't do what they say on the tin.

The Government thinks it is being bold by proposing that students will now need to study two religions – rather than just the one. Whilst this is clearly preferable to students focussing narrowly on just one religion (isn't that what places of worship are for?), surely this still falls far short of what is required to provide students with what could be considered a "well-rounded education".

As the DfE has itself acknowledged, the new GCSE will do nothing to affect the emphasis faith schools put on their individual teachings. Under the proposals, schools, including faith schools, will still able to offer GCSE and A Level options dominated by a single religion (75% at GCSE and 100% at A Level).

This is likely to deliver little meaningful change or progress in terms of providing a rounded education or challenging the extent to which some schools may be failing to prepare students for life in modern Britain.

Surely, in a secularised society, the State's role should be to ensure pupils receive religion and belief teaching from a neutral, academic perspective. Rather than studying a religion in depth, wouldn't it be preferable if the purpose of the subject was to allow pupils to develop a broad understanding of the whole history of human ideas and thought. Religion would still be there, but it wouldn't dominate.

This bring me to another major flaw with the proposed new content – the absence of a systematic study of secular ethics and non-religious worldviews.

In a Ministerial Statement upon publishing the draft subject content, the Minister of State for School Reform, Nick Gibb, claimed that "as well as studying key scripture and religious texts, students will have the opportunity to learn about critiques of religion (external and internal) and other nonreligious beliefs through the study of philosophy and ethics."

Well, not really. Whilst there is limited opportunity to study non-religious views within the thematic studies, this remains optional with no requirement to do so. For many pupils, this will be a missing component of their education.

What's really needed is a broadening of the subject content rather than it being restricted to just one or two religions. But if this approach is taken, surely an additional element should be introduced to include the systematic study of non-religious worldviews and secular ethics as a comparative framework.

Surely this is essential to enable pupils to adopt an enquiring, critical and reflective approach to the study of beliefs? Secular and philosophical critiques can deepen our understanding of religious view points and are part of, not separate from, religious literacy.

Humanists are keen to see Humanism added to the list of 'religions' on offer for in-depth study. It would however be wrong for non-religious worldviews and secular ethics to be subsumed solely under the label of Humanism. Humanists should also be cautious of falling into the trap of trying to bend Humanism into the mould of a religion, and talking about Humanist "practices", texts or sources of "authority".

The point surely should be to offer a wide range of ethical perspectives, for example, consequentialist ethics, virtue ethics, or deontological (duty-based) ethics that students can learn about and question. The subject content should allow students to explore fundamental questions through a host of secular philosophical approaches and perhaps touch on the history of unbelief, encompassing atheism, agnosticism, free thought, humanism, rationalism and scepticism.

There is a real danger that the draft subject content will turn the clock back on the limited progress that has been made regarding the way religion is taught in schools. The growth in the number of pupils taking Religious Studies since 2000 has largely been the result of the focused courses schools have offered in "Philosophy and Ethics". Many schools, including, Goffs School in Hertfordshire, have taken the step of revising the subject content and rebranding religious studies as "Philosophy and Ethics" in order to successfully boost student numbers and engagement.

This indicates that young people are interested in engaging with religious, philosophical and ethical ideas. Unfortunately, the Government's proposal to coerce them into deep theological study of a particular religion will deny them the opportunity to study religion and belief in ways many find engaging.

The proposal to restrict the subject content to two religions, with philosophy and ethics relegated, runs the real risk of making the GCSE less educationally valid, less relevant and less appealing to both pupils and teachers alike. This may well inflict long-term damage on an already contested and much maligned subject area.

But perhaps that's no bad thing.

For too long the concept of 'religious education' has allowed religious ideas to be ring-fenced for privileged treatment in schools, often presenting them in an acontextual, and in an implicitly confessional manner. If we take the label of 'religious education' away, we free ourselves from the need to give religion special privileges and the biased presentation it gets at the moment.

Religious education evolved out of religious schooling and it is clear that the historic relationship between the Church and the State continues to have a profound influence over the way in which religion is taught in schools.

The subject is regarded as a key marketing opportunity by the religion and belief communities, all competing for space in the subject.

The privilege, once solely enjoyed by the Church of England is increasingly being shared by other religions and belief groups, but it still isn't an appropriate way for state education to carry on. Perhaps it's time for faith leaders to make way for the educationalists.

We often hear about the "urgent need" for greater religious literacy. Yes, society would benefit from young people being familiar with a broad range of religious beliefs and practices and an understanding of the importance of faith to many people, but too often religious literacy is code for presenting religion in the best light possible.

We should be careful about allowing the Trojan Horse of 'religious literacy' to be used to advance the agenda of increasing religion's role in public life or to justify the way in which religion is privileged in our schools.

Policy makers may not wish to move away from the subject of religious education for political and cultural reasons. But until the subject is properly reformed, young people will continue to be denied the objective, relevant and academically rigorous education they deserve.

The Government consultation closes on 29 December. You can respond here.