Ministerial role that promotes religion should have gone, not just the Minister 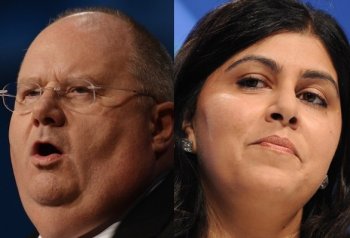 As Eric Pickles takes over Baroness Warsi's ministerial responsibilities for promoting faith, Stephen Evans argues that the job should have gone, not just the minister.

In one of the more popular moves of her political career to date, Baroness Warsi this week resigned from the Government over its policy on the crisis in Gaza.

In addition to giving up her role as a Foreign & Commonwealth Office minister, Baroness Warsi also stood down from her dual role of Minister for 'Faith and Communities'.

Many secularists may be glad to see the back of Sayeeda Warsi, but regretfully, rather than using this opportunity to abolish her unnecessary and deeply anti-secular ministerial position, David Cameron has shifted the responsibility over to the evangelically Christian Secretary of State for Communities and Local Government, Eric Pickles.

This role of 'minister for faith' was specifically created for Baroness Warsi. Its remit was to work with 'religious and community leaders' to "promote faith, religious tolerance and stronger communities within the UK".

The promotion of religious tolerance and stronger communities are noble and legitimate aims, but these objectives are fundamentally undermined by the part of the brief that creates a ministerial responsibility to promote religion and "celebrate faith".

But this is clearly a brief that suited Baroness Warsi's, and now Eric Pickles' personal predilections.

Upon her appointment Warsi was quick to declare that faith was "back at the heart of Government".

Baroness Warsi made it her mission to misrepresent secularism and use every opportunity to deride secular principles.

With no apparent sense of irony, she used a sickeningly sycophantic visit to the Vatican, Europe's last remaining theocracy, to equate secularism with totalitarianism. She warned of a "militant secularisation" which "at its core and in its instincts it is deeply intolerant" which was attempting to "remove all trace of religion from culture, history and public discourse".

In 2012, when the National Secular Society obtained a legal ruling from the High Court that local authorities had no statutory power permitting them to impose prayers on elected councillors, Mr Pickles blustered about the "intolerance of aggressive secularism" vowed to enact legislation to reverse the High Court decision.

All the ruling confirmed was that prayers shouldn't form part of the official business of a council meeting. As one would expect in an open and free society, councillors were still at liberty to partake in optional prayers before the formal start of council meetings, if they so chose.

But Mr Pickles wasn't satisfied and later went on to disingenuously claim that his Localism Act had reversed the High Court decision, which he said represented a "victory for freedom to worship over intolerant secularism".

In April 2013, Mr Pickles also suggested that "militant atheists" should accept that Britain is a Christian country – despite the steadily rising proportion of minority religions in the UK, and the fact that the non-religious now constitute a majority.

One major objective of secularism is to balance everyone's religious rights and freedoms fairly. This naturally includes the rights and freedoms of the non-religious and those of minority religions. Yet Mr Pickles chooses to portray this as secularists trying to "impose" their "politically correct intolerance" on others.

It is this lack of even-handedness that is most troubling about the role of the minister for faith, and those that have been chosen to fill it.

The existence of such a post simply entrenches religious privilege by giving the religious, or perhaps their self-appointed 'faith leaders', undue voice and influence in public policy. Such a post also feeds sectarianism and leaves citizens without a religious faith feeling alienated, less valued, and somewhat disenfranchised.

Instead of prioritising religious identities, Mr Pickles should be trying to bring people from all sections of society together to foster cohesion and create stronger communities. The current obsession with relying on faith communities to help build the 'big society' is both lazy and misguided. The Government would do better to focus their energies on promoting the shared values we have as citizens, rather than playing divisive identity politics.

We do however live in a world where religious freedoms are undermined in a myriad of ways. The threats are not coming from the secularists that Mr Pickles denounces, however, but from those that wish to impose their beliefs on others, an aspect he seems markedly less keen to highlight.

Heiner Bieleveldt, UN Special Rapporteur on Freedom of Religion or Belief, told an audience at the LSE in March 2012 that state religions, whatever religion they may be, are a potential threat to the freedom of religion of those who do not belong to the dominant sect.

The brief for such a post could be to objectively identify and assess threats to religious and belief freedoms at home and overseas, and propose strategies to maximise freedom of religious and other belief, insofar as it does not impinge on the rights and freedoms of others and of course, subject to the avoidance of unreasonable public expenditure.

But such an approach wouldn't fit it with Mr Cameron's electorally opportunistic (or so he believes) narrative of 'Christian Britain' where even-handedness makes way for special treatment, and his Ministers are encouraged to peddle their divisive rhetoric, regardless of the negative consequences for our politics and wider society.