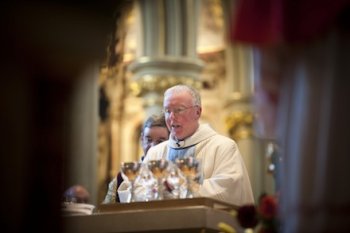 The Catholic Bishop of Portsmouth, Philip Egan, has given a lecture at King's College in London in which he launched a full frontal attack on secularism. But the secularism the Bishop denounces, argues Terry Sanderson, is simply a figment of his imagination.

This week the Catholic Bishop of Portsmouth, Philip Egan, gave a lecture at King's College in London about whether Christianity "should still have a voice in the public square."

The bishop, of course, concludes that it should. Needless to say, he concludes far more than that.

He begins his talk with a full frontal attack on secularism, averring that:

"Hard-line secularists, such as the National Secular Society, seek systematically to exclude any religious expression from the public square; as Alasdair Campbell once said, 'We don't do God.' Soft-core secularists, on the other hand, happily wish each other 'Merry Christmas.' They tolerate Britain's Christian traditions, as long as those who practice those traditions do not expect any privileges or discriminate against the rights of others."

In making his case for what amounts to a theocratic basis for society, he then repeats all the tired and debunked stories of supposed restrictions on religious expression in Britain – he talks of 'banned' crosses, renaming Christmas a 'Winter Festival', political-correctness-gone-mad and so on. He even invokes that cockeyed visionary Bishop Nazir Ali, one of the chief proponents of the 'Christian persecution' narrative. He also quotes extensively, like a star-struck fan, from the ultra-conservative Pope Benedict XVI.

Did you know, by the way, that the Pope Benedict's visit to Britain was a resounding success, marred only by the protests of a noisy, but tiny minority? (Unfortunately for Bishop Egan, the Catholic Church's own research says differently).

Bishop Egan said in his lecture:

"Secularism is too flimsy a basis for British culture. It cannot guarantee human flourishing nor sustain long term the advances the British people have achieved, the great value placed on freedom of speech, freedom of political affiliation and respect for the rule of law, with a strong sense of the individual's rights and duties and of the equality of all citizens before the law. Instead, secularism is producing a society without foundations, one that develops randomly on the hoof through pressure-groups, legal precedent and political expediency.

Its ring-fencing of religion to the private domain, its dissolution of the ground of ethics and the basis of law, its amnesia of the past and intentional eclipse of its Christian origins, its relativism that fosters harmful ideologies and leads to victimisation of the weak, its positivistic reduction of human knowing to the empirically verifiable, its proven inability to support stable marriages and family life, its growing restriction on religious freedom, and its innate tendency towards greater surveillance and state control, all suggest that the Church has a crucial therapeutic 'anthropological mission' within 21C British society."

That's quite a catalogue of error that secularism has fallen into. But let's have a go at rewriting that paragraph for Bishop Egan, from another point of view:

Secularism is the only way that a multicultural, multi-faith Britain can survive without succumbing to the religious warfare and sectarianism that has plagued Europe for centuries – most of it emanating from the Vatican.

Secularism can sustain and build on the advances that Britain has made – all of them achieved in the face of persistent and sometimes fanatical religious resistance. It protects freedom of speech – having, in the main, dispensed with the religious concept of blasphemy, a concept that has hobbled free expression down the centuries.

Secularism, when paired with democracy, gives everyone a free vote and a chance to decide their political stance without it being dictated from the pulpit. A secular society makes its laws based on reason and fact, not on the dogmas of a long-past era that has little connection with the lives we live now.

A secular society makes its laws based on compassion, fairness and knowledge, not on the diktats of a man who elevates himself above all others and claims his power comes from a divine source and is thereby beyond question.

The people within a secular society gain their moral guidance from a number of sources. No single source can claim to have the complete truth and no religious leader can have the power to impose his own concept of goodness. Our search is individual.

Self-determination, within the law, is a marvellous thing. Far from being a retreat into selfishness, as Bishop Egan would have it, it is something to be valued and cherished.

In a secular society, rules that make no sense to us can no longer be imposed by an over-mighty church. No divorce? No contraception? No abortion? No gay rights? All these things were illegal because of religion, and all are now legal because of secularism. We will no longer have someone else's vision of what is the 'good and right' imposed on our law. This is not the tragedy Bishop Egan portrays but the advance of compassion.

Each person is now at liberty to find their own truth and their own 'good life'. No-one will be burned at the stake any more for not agreeing with the church. There is no more "heresy". We have laws that we have made together through our democratic parliament. We do not want laws that are imposed by self-elected theocrats whose self-interest know no bounds.

But in a truly secular democracy, religion is not marginalised, it is protected and valued for those who wish to observe it.

But it is not privileged.

It is not given the special status to which it has lazily become accustomed. It will have no special input into the democratic process – we all have a right to participate on equal terms, religious and non-religious alike.

The right to worship and to assemble for the expression of religious rituals (within the law) is protected. Beyond that, religion must make its case for respect, it cannot demand it. And it can only expect to be valued on the basis of its merits, not because it feels entitlement. This applies to every other interest group, too.

In a theocracy the weak are vulnerable. When the kind of society that Bishop Egan longs for was created in Ireland during the last century, where the Church was able to impose itself on a whole nation, it became a tyranny. The weak were exploited and abused. The evidence is there and still emerging. A theocracy has nothing but persecution to offer dissenting minorities.

Bishop Egan accuses secularists of forgetting the past. Far from it, it is by remembering the past that we are convinced that secularism is the safest and best answer.

It is Bishop Egan who has rewritten history, who has edited out all the evil that his Church has perpetrated and would do all over again if it gained power.

But it never will regain power – not in Britain, anyway. And nor should any other religious authority.

The secularism that Bishop Egan denounces is a figment of his imagination and an expression of his own sense of entitlement.