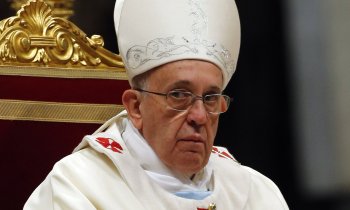 This week marks the first anniversary of the election of Cardinal Jorge Mario Bergoglio of Argentina as Pope Francis. But as far as far as child abuse is concerned, it's just business as usual at the Vatican – but with better PR, argues Keith Porteous Wood.

At the first anniversary of his papacy, it's a good time to review the Pope's handling of the child abuse crisis, which so plagued the papacy of his predecessor.

Few would dispute that clerical child abuse was the most pressing issue, given that his predecessor's lamentable performance on this was widely thought to be the main reason that a papal election took place.

The nearest to anything positive in the whole year is the Holy See's announcement, during the examination of the UN Committee on the Rights of the Child (UNCRC) (surely no coincidence) of the establishment of a Commission on clerical child abuse. A sceptical New York Times editorial announced this as "long overdue". Associated Press concluded it had been "hastily put together", an analysis reinforced by the absence of any more detail three months later.

In a wide-ranging interview in the Corriere della Sera on 5 March 2014, the Pope said the following on clerical child abuse:

"Abuse cases are horrific because they leave the deepest wounds. Benedict XVI has been very courageous and opened a path. The [Catholic] Church has moved very far along this path. Possibly more than most. Statistics on the phenomenon of child abuse are astonishing, but they also show clearly that the great majority of abuse takes place within the family and amongst neighbours. The Catholic Church is probably the only public institution that has acted with transparency and a sense of responsibility. No-one else has done more. And yet the [Catholic] Church is the only institution to have been attacked."

This short passage is remarkable for its aloofness, its shameless attempt to downplay the seriousness of the abuse by drawing invalid comparisons, its solely positive portrayal of the Church's role, its failure to acknowledge the worldwide clerical child rape on an industrial scale for decades, and probably centuries. His comments are hardly a display of the transparency demanded by the UNCRC.

Despite asking specialist lawyers recently, I am not aware of a single case where the Church has voluntarily reported a cleric or provided evidence to secular justice authorities.

No other organisation is able to maintain such a lack of transparency because no other organisation can do so by exploiting the sovereignty of the nation state. Nor is any responsibility taken in the Pope's comments for clerical child abuse, far less any contrition being shown nor any concrete action proposed.

Of course there are abuse problems with other denominations and other religions, but the reason "no-one else has done more" as he says, is most likely to be that there was more wrong in the Catholic Church than in any other single institution.

The numerous inquiries in the form of reports and commissions were not written to victimise the Church, but to expose the truth. In every case what the inquiries found was very similar, and horrific; none concluded there was no case to answer. Rather than face this, the Pope has resorted to the Church's customary unprincipled last line of defence: play the injured victim card.

It is both significant and troubling that these first words of Jorge Mario Bergoglio of substance on this topic are to praise Benedict, the man who has presided over the decades of the Church's disastrous failure appropriately to tackle child abuse since he was made prefect of the Congregation for the Doctrine of the Faith (CDF) in 1981. It is extraordinary that Francis should seek to identify with and even praise his predecessor, who, according to the PBS Frontline documentary Secrets of the Vatican aired on 25 February 2014 claims, resigned because of his inability to handle this issue.

"In the [C]hurch's entire history, no one knew more but did less to protect kids than Benedict," said Barbara Dorris, outreach director of the U.S.-based victims' advocacy group SNAP, the Survivors Network of those Abused by Priests. "As head of CDF, thousands of cases of predator priests crossed his desk. Did he choose to warn families or call police about even one of those dangerous clerics? No. That, by definition, is a cover-up."

I acknowledge that there may well have been cases or procedures where Pope Benedict would have liked to have done more, but felt prevented from doing so because of internal politics.

The current Pope carefully omits to set out just what this courageously-opened path is, along which "the [C]hurch has moved very far". I fear the Pope is not moving to greater transparency but to total secrecy. The most stringent of edicts about secrecy is the one Benedict introduced in 2010, effectively centralising in the Vatican all decisions over clerical child abuse.

And what precisely will the Commission achieve? Apparently "formulate suggestions for new initiatives" - a better starting point would be to follow the concluding observations of the UNCRC, which is a panel of experts. As Ireland has just found out, internal commissions lead to cover-ups. And there have been suggestions that the Pope wants to speed up the process of dealing with accusations - presumably another way of releasing into the community even more perpetrators without criminal records.

It is not setting the bar very high on the achievements of the Church simply to state that the great majority of abuse takes place within the family and amongst neighbours. The families and neighbours haven't signed the UN Convention, don't have a professional duty of care over the children and don't claim to have supreme moral authority.

The Pope's comments are reminiscent of the rather ill-judged response by the Holy See to criticism at the UN Human Rights Committee on 22 June 2009, which does not appear on the Vatican's website as "the Vatican had chosen not to publish it, in order not to 'add gasoline to the fire' on a volatile topic". It elicited widespread condemnation from newspaper and media outlets around the world.

One element of this response understandably not repeated was that:

"From available research we now know that in the last fifty years somewhere between 1.5% and 5% of the catholic clergy has been involved in sexual abuse cases."

Even at 1.5% this approaches 9,000 clergy. And most perpetrators have multiple victims and often abuse the same victim repeatedly.

Whether this is one of the statistics that the Pope regards as "astonishing", a rather mild word, is not known, but the UNCRC put the number of victims at "tens of thousands of children worldwide".

To suggest that: "The Catholic Church is probably the only public institution that has acted with transparency and a sense of responsibility" is at utter variance with the numerous formal reports in Ireland, the commission in Australia, the countless civil lawsuits and criminal trials.

And the Pope maintained this shortly after the Vatican's worst worldwide press coverage ever, following the UNCRC's report.

Unfortunately we can't dismiss these comments of the Pope as an over-defensive response to an aggressive interviewer. The interviewer was sickeningly obsequious; he started the question by saying: "Fortunately, the scandals that have perturbed the [Catholic] Church's life are now behind us." And, although we would like to have thought otherwise, the comments are in line with the Holy See's general stonewalling of the UNCRC in the last two years.

It is clear that there has been no perceptible change in the treatment of clerical child abuse since Benedict, particularly since the Holy See refuses, despite all protests, to accept that it is responsible for enforcing the Convention on the Rights of the Child throughout the worldwide Church.

It is no longer credible to hope that the Pope has not been behind, or fully supportive of, the Holy See's strategy at the UNCRC. After decades of electing arch conservative cardinals, the conclave simply wanted business as usual, but with better PR. So, in retrospect, it is no surprise that the papal election was such a short one.

What could the motives be of the Pope in making these irresponsible comments, praising his failed predecessor, continuing with business as before and telling the UN where to get off?
I fear the answer is the papal equivalent of the little boy sticking his fingers in his ears and saying defiantly to his chiding parents: "I can't hear you". It suggests the Church considers that the huge reputational and financial scale of the child abuse scandal already publicly known -- and there is much more to come -- leaves them no option but to continue to deny justice to victims by refusing them compensation (or minimising it) while shielding perpetrators from the secular authorities.

The Church and the Pope will, however, find it increasingly difficult to continue with business as usual. Even The Times has run an editorial describing the Pope's defence of the Church's record on sex abuse as "irresponsible".

International rules to prevent money-laundering and tax evasion in the EU are forcing discipline on the Vatican bank. Similarly, increasing international concerns about child abuse in the Church, in the light of the growing scandals and reports such as the one in Australia, backed up by criminal and civil legal cases and rigorous UNCRC monitoring, will make secrecy much more difficult to maintain in the Church worldwide, and the Vatican too.

Just as the Vatican risks being branded a rogue state if it does not thoroughly clean up the Vatican bank, a similar fate awaits it if it fails to scrupulously follow the UNCRC's concluding observations and finally offer full disclosure of child abuse within its ranks.