The President’s Broadcasting Year – behind the scenes 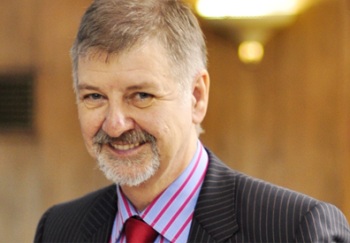 After a busy year as President of the National Secular Society, Terry Sanderson reveals some of his behind-the-scenes moments.

Being President of the National Secular Society is nothing if not unpredictable. And this year has been no exception.

Although we are engaged in a very serious debate about an increasingly frightening problem, there are moments of hilarity and fun.

These are what I want to tell you about here. After all, it is party season and the time when people relax and let their hair down.

One of the things I have to do as spokesperson for the NSS is take part in broadcast interviews. These are usually live, and whatever you might have said to the researcher who originally asked you to take part, you can be sure that when you get on air, the presenter will ask you something completely different. If you aren't quick-witted (and I'm not) this can completely throw you.

And often you have to become an instant expert on topics that are completely unfamiliar to you. I was asked once to take part in a debate on embryo research and its moral implications. I would be up against a religious spokesperson who was implacably opposed to it, said the researcher.

It only occurred to me after I'd said yes to the interview that I knew nothing about the subject.

The programme was to be broadcast the next day and so I spent the night frantically searching online to educate myself about the topic and the arguments for and against.

I could imagine my opponent being someone from the Catholic Church who was terribly au fait with it all, maybe even being a scientist or medical specialist.

When the programme started it rapidly became clear that my opponent was an elderly Hindu gentleman who knew even less about the subject than I did. By the time it was over I felt like a positive expert! Still, I expect Mr Singh slept easier than I did the night before.

There are other times when you have those "you've been framed" moments. It's inevitable occasionally when it's going out live.

I was on a radio programme a couple of months ago commenting on the case of Celestina Mba. You will recall she is the Christian lady who didn't want to work on Sunday. The presenter asked me: "What's the problem with her taking Sundays off?"

I replied: "Well, it isn't very fair on her colleagues, is it, having to work while she is at home having it off."

I could have bitten my tongue, and imagined that, even before the interview was over, someone would have it up on YouTube.

Indeed, another of my broadcasting gaffes did get on YouTube (and no, I will not give a link – it's embarrassing enough having to remember it). It was that Sunday morning ethics programme where people contribute down the line through their Skype connection. I was all set up and ready and the studio had me on hold, but the debate went on and on and I thought that they would run out of time before they got to me.

But suddenly Susanna Reid was saying: "And what do you think about that, Terry Sanderson?"

At that very moment my laptop screen went into sleep mode and all was black. I imagined that I had become disconnected: "Christ, it's broken down," I shouted. Unfortunately, the camera and microphone were still live and my panic-stricken expletive was broadcast to the nation.

Such are the vagaries of live broadcasting, but most of the time it goes smoothly and the secularist message gets out without a hitch. The NSS's various spokespeople have completed more than one hundred radio and TV interviews this year, so we're beginning to know how it works.

One of the interesting aspects of broadcasting is that it brings you into touch with people you might not otherwise meet. Broadcasters often pitch me — and other NSS spokespeople — against bishops and vicars and priests and imams in the hope that they will get a fireworks display of discord. Sometimes they do, but often when I explain what secularism is about, we get agreement. The presenter always seems crestfallen when the bishop says: "I tend to agree with Terry Sanderson on this."

There are some Christians, however, who are not amenable to sense. Stephen Green of Christian Voice is one – I will no longer debate with him, such is his irrational and boorish silliness. Another is Andrea Minichiello Williams – the woman behind the Christian Legal Centre and all those 'persecuted Christian' court cases that rarely get anywhere. Her technique is to get the first word and then keep on talking until she's used up all the time, effectively denying her opponents a say. I now warn presenters of this if I know she's going to be on.

During the Jerry Springer – the Opera controversy a few years ago, I was invited – along with Christian critics – to go to the offices of the Daily Telegraph and watch a preview version of what the BBC planned to broadcast and then comment on it. I found myself sitting next to vicar's wife Anne Atkins, she of the Thought for the Day infamy.

As the Jerry Springer show was played, its notorious bad language was in much evidence. At one point one of the characters sings (very loudly) "F--- You! F--- You!" (He sang it without the dashes).

Anne Atkins turned out to be slightly deaf and was having trouble following the dialogue. She turned to me and asked: "What did he say?" I replied "F--- You, Anne. He said F--- You."

It was something I'd been longing to say to her for many years.

On a debate about faith schools, I was up against a Muslim convert who I chatted to in the green room beforehand. "Why did you convert?" I asked. "Oh, I didn't convert," he said, "Everybody's a Muslim. It's just that some people don't know it yet."

I felt a bit of a chill run through me.

Another incident occurred at Sky News in an interview about the burqa where I was to debate the issue with a veiled woman. She, however, refused to take part in the debate when she discovered it was to be conducted by a male presenter.

The Sky team hurriedly arranged for her to be seated in an adjoining studio and seen on a monitor. She was happy just so long as she wasn't in the company of men.

It seems that the NSS has a message that is increasingly relevant, which is why we are invited to so many debates and broadcasts. The issue of secularism is rising on the political agenda, and it won't be long before politicians — who assiduously avoid it at present — will have to face it square on.

That's when the NSS will show its value. On the thorny question of how religions can live together in a multicultural society, secularism has an excellent and democratic answer.

To make politicians listen, we must keep up the pressure. We need your support to do this. Contributing to message boards is not enough. We need you to make the commitment to membership. January is renewal time for many of our members – why not renew your membership now? You can do it quickly, easily and securely online here.

In the meantime, from the council, staff and volunteers at the NSS, we wish you a very happy festive season and a prosperous New Year (which I hope will be as a proud member of the NSS).

Terry Sanderson was re-elected President of the NSS at last Saturday's AGM.