Is the “Francis Effect” just a figment of Catholic wishful thinking? 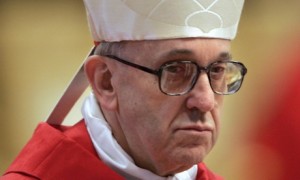 Anecdotal reports of a rise in Catholic mass attendance since the arrival of the new Pope do not seem to be supported by systematically obtained data – at least in USA.

The United States is home to the world's fourth-largest Catholic population, and, according to the latest findings from the Pew Forum, a well-respected centre for religious research, the Pope appears to be well-liked by Catholics and non-Catholics alike, rated favourably by 79% of Catholics and 58% of the general public.

But his personal popularity does not seem to have produced the claimed Catholic resurgence in the U.S., where 10% of adults now define themselves as former Catholics.

The Pew Research Centre has pooled all of its surveys conducted between Francis' election in March and the end of October this year and found that the percentage of Americans who identify as Catholics has remained the same — 22% — as it was during the corresponding seven-month period in 2012. In fact, our polls going back to 2007 show Catholic identification in the U.S. has held stable, fluctuating only between 22% and 23%.

Though Americans may report attending church more frequently than they actually do, Pew surveys find that self-reported levels of Mass attendance have remained virtually unchanged since the new pope was elected. Since April of this year, 39% of U.S. Catholics report attending Mass at least weekly, similar to the 40% attendance figure last year.

The Sunday Times recently commissioned a Yougov poll to check British perceptions of the Pope, eight months into his pontificate.

36% think he is doing a good job, with just 3% thinking he is doing a bad job, and 61% undecided. A similar proportion (31%) expect him to make the Catholic Church more liberal, while 23% think there will be no change, and 42% are undecided.

Pope Francis has made 17% regard the Catholic Church more positively, with 2% feeling more negative, and the remaining 80% having no opinion or an unaltered one on the subject.

Asked about their favourite part of Christmas, its religious significance came in sixth equal of fourteen places (on 11%), with carols in eleventh position (on 7%). Spending time with family and friends (53%) and giving presents to others (37%) easily topped the list.

The full findings can be seen here.