Eric Pickles is doling out taxpayers’ money to ‘faith groups’ – where will it end? 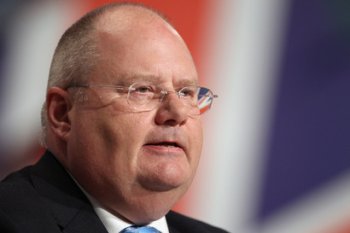 Mr Cameron gave Eric Pickles permission with the "Big Society" project. But we are going to have to ensure that he doesn't make the Big Society into one where only "people of faith" can contribute or benefit, argues Terry Sanderson.

It's becoming increasingly difficult to tell whether Communities Secretary Eric Pickles is speaking from parliament or a pulpit. He seems to be going on about "faith" every time he opens his mouth. He has set himself up as the champion of Christianity, defending it from its supposed persecutors and making sure it is brought into the political fold at every opportunity.

Today the Daily Telegraph reports that in an "impromptu address" at the launch of the Westminster Abbey Institute, Mr Pickles said to "an audience of politicians and churchmen" that people in public life should "never be made to feel they must apologise for speaking about their faith."

He urged them to litter their speeches with references to the Book of Common Prayer.

The Westminster Abbey Institute describes itself as being "founded to foster faith in public life, among those working around Parliament Square and beyond."

The Telegraph claims that "Mr Pickles, who last year changed the law to ensure that councils could not face legal challenges for including prayers in public meetings, accused the previous Labour Government of "diminishing Christianity" by suggesting that religion and politics could not mix."

This makes Eric Pickles sound like a dictator on the lines of Stalin who could change inconvenient laws unilaterally. Fortunately, he does not have the powers of a dictator and he did not change any law. His claim that the Localism Act permits councils to ignore the High Court ruling is completely untested and extremely dubious legally.

Mr Pickles insisted that Britain"is still a Christian country" despite all the evidence to the contrary. Indeed, an article by David Voas, professor of population studies at Essex University, published only today asked the question: "Is Christianity dying in Britain?" and concludes — after examining the evidence rather than just making it up from wishful thinking — "In short, religious belief, and the importance that people attach to those beliefs, has declined just as fast as attendance and affiliation." And as we know, attendance has declined catastrophically.

Mr Pickles also said that faith could help motivate people into public service. "For most people … whether they are Members of Parliament, or councillors or somebody involved with a local Scout group, public service is about putting something back in," he said.

This is not the first time in the past few days that Mr Pickles has made claims about Christian public service. He announced this week that the Department for Community and Local Government (DCLG) is funding £200,000-worth of grants exclusively for "faith-based groups" for unspecified "community projects".

The Together in Service project will dole out grants from £2,000 to £5,000 "to support faith groups in undertaking new multi-faith volunteering projects at local level." However, although applicants will be required to apply non-discrimination policies to their projects, the organisers seem to have forgotten to include "sexual orientation" on the list. (See grant application pack available here)

The Department for Communities and Local Government, which Eric Pickles heads, assured a journalist who enquired that there was no discrimination intended against LGBT people. "In fact, they say they will only fund groups that have a proper equal opportunities policy in place, so no bar on LGBT groups if they meet the grant requirements," the journalist told me. "They say that the equality monitoring requirements cover only 'ethnicity, faith groups, gender and disabilities', because that is the feedback info most relevant to the aims of Together in Service. Basically, they're not asking for reports from successful applicants on sexual orientation just as they're not asking for reports on age or marital status (which are also protected characteristics)."

Together in Service will run for 2 years and will be delivered by FaithAction, a national network of faith-based and community organisations. Faith Action itself has been awarded £6 million to teach English to immigrants.

The DCLG says Together in Service "will be based around an ongoing calendar of faith-based volunteering around chosen themes relating to religious festivals or celebrations. Every month there will be a focus on the volunteering that the featured faith undertakes by itself, for example Harvest Festival, celebrated by the Christian faith or Mitzvah Day which is run by the Jewish community. The programme will then feature multi-faith projects, where the lead faith has joined up with other religions to deliver voluntary work."

Speaking at the launch at Westminster Cathedral Hall, Eric Pickles said: "Faith groups are united in their desire to make things better for the good of the whole community. Volunteers tirelessly dedicate millions of hours each year to strengthen our society from the simple acts of kindness such as visiting the elderly, to collecting for the needy or helping to clear up the local park.

"Our faiths, our community and our society are stronger by far when they join up and Together in Service will not only strengthen the existing work carried out by faith groups but will encourage people of all faiths and none to roll up their sleeves and get stuck into wider volunteering."

Projects that apply for funding will have to match the amount requested, engage with other 'faith groups' and have to prove that they are monitoring equality issues "covering ethnicity, faith groups, gender and disabilities."

Of course, we have no problem with "faith groups" (or secular groups) using public money to do work that truly benefits the whole community. But the way that Together in Service is described seems to indicate that it is going to be some sort of multi-faith jamboree, rather than something of use to the wider community.

We suspect that the pious Mr Pickles has only just started on his plans to dole out public cash to religious groups. He thinks they are intrinsically worthy because they promote a world view that he happens to share. Mr Cameron gave him permission with the "Big Society" project, but we are going to have to keep a wary eye on Mr Pickles to ensure that he doesn't make the Big Society into one where only "people of faith" can contribute or benefit.