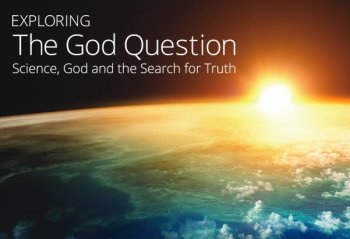 A new DVD resource was launched this week at the Scottish Storytelling Centre that claims to review, objectively and dispassionately, the case for the existence of God. It examines three fields – the cosmos; life and evolution; and the mind and consciousness. A ten minute preview is available here.

The resource, under the heading "The God Question", claims to review the evidence for and against the existence of God and to leave viewers to draw their own conclusions, with its producers insisting that "we do not seek to influence the answer". It has been commissioned by a Scottish charity called the Search for Truth Charitable Trust, whose chair, Professor John Spence, claims "no funding partners at any stage attempted to have any influence on the editorial content on the series", although he provides no information as to who these funding partners are. Interestingly, its two charitable objectives as listed on the Scottish Charity Register are "the advancement of education, the advancement of religion". Production of the website is by Sanctus Media, a specialist company serving the Church and charity marketplace operating from a base in St. Andrew's Church, Bo'ness, Scotland. Production of the DVDs and teaching materials is by Kharis Productions, set up in 2002 by Iain Morris who has produced materials for Christian ministries such as the Billy Graham Evangelistic Association – for which he produced more than thirty documentaries.

So given the provenance of the product, the issue of neutrality and whether the opposing arguments — and indeed the evidence — are presented dispassionately and objectively will be a key test, and the tests appear quite quickly on the website. As an example, the homepage states that "Science is unable to explain why consciousness exists or what it is". But you won't find a sentence that says just as bluntly that neither does religion. Likewise, the introductory page to the Cosmos section states "In the series' first episode, high profile atheists and theists battle to establish whether the science of the cosmos appears to bolster the case for atheism or to herald its demise". This suggests that the pre-existing cosmological case is one that supports theism and the existence of a creator, and it's up to the atheists to disprove it. Balance or bias?

Contributors are colour-coded on the The God Question website using purple for theists, green for atheists and grey for neutrals, and are a fascinating mix. For conspiracy theorists who like that sort of thing, there are 10 green atheists, 23 purple theists, and 19 grey neutrals.

From the green side we have the late Christopher Hitchens, the inevitable Richard Dawkins, UCL evolutionary biologist Steve Jones, the author of The End of Faith Sam Harris , the sceptic Michael Shermer, author of Genesis Revisited – A Scientific Creation Story, and the philosopher Daniel Dennett.

Ranked against in the purple patch are the Christian apologist William Lane Craig, the former Chief Rabbi Lord Sacks, Rev Dr John Polkinghorne, Rev Professor Michael Reiss, and Dr William Dembski, labelled as an American philosopher, theologian, a supporter of the Intelligent Design (ID) movement and Senior fellow of the Discovery Institute's Center for Science and Culture. We also have Dr Kenneth Miller, an evolutionary biologist who sees no conflict between his Catholic faith and his science, but who argued cogently and successfully for the plaintiffs in the celebrated Kitzmuller versus Dover Area School District case in Pennsylvania in 2005 concerning the teaching of ID in Pennsylvania schools. In the process he completely exposed the scientific fraud in the controversial ID book Of Pandas and People and in 2011 was presented with the Stephen Jay Gould Prize by the Society for the Study of Evolution.

One might raise an eyebrow or two at the categorisation of the neutrals, although as the definition of 'neutral' is not given, one has to exercise caution as to its exact interpretation. For example, one of the most celebrated neutrals here is Dr John Rutter, of choral music fame. A Fellow of the Guild of Church Musicians, in 1996 the Archbishop of Canterbury conferred a Lambeth Doctorate of Music upon him in recognition of his contribution to church music.

Another neutral is Professor Michael Ruse, who is in fact a self-proclaimed atheist and Dawkins critic (in so far as the latter's God Delusion is concerned) who is labelled as taking the position that the Christian faith can be reconciled with evolutionary theory.

The teaching resource has already found favour with the Church of Scotland, with the Reverend Sandy Fraser commenting: "Even the Humanist Society of Scotland should approve the open-ended approach of this resource and its emphasis on making up your own mind from the evidence presented."

So, is The God Question objective and dispassionate, and does it do exactly as it says on the tin? What evidence is being presented for the existence of a deity, and how is it being presented? If science can't explain consciousness, is the viewer railroaded into believing that religion does? Is the study of cosmology heralding the demise of atheism? Is a question framed in this manner balanced or biased?

It seems to me that the proponents of creationism and ID and from an exclusively Christian platform (immediate evidence of bias?) have got their wish after all – to get their position into schools under the 'teach the controversy' banner and what appears to be the pretence of open-mindedness and an evidence basis. In fact, the Church of Scotland urges its readers in its Life & Work magazine this month: "Why not, as a gift from your church, present the DVDs and a class set of Study Guides with Leader's Manual to your local school?" Isn't it appropriate at this time of year to ask if turkeys vote for Christmas?

I wonder if the use of these materials will be controlled and restricted to classes on religious and moral education (RME) or if time will be given over in the science curriculum to debate these issues. Just this month in a letter to the Scottish Secular Society, Alasdair Allan, Minister for Education in the Scottish Government stressed that "Creationism is not a scientific theory and is not a topic within the curriculum framework in Scotland". I do hope that holds true, although I fear the producers of this package could easily fool educators into believing that their approach is unbiased and evidence-based. We shall see.