One oath for all 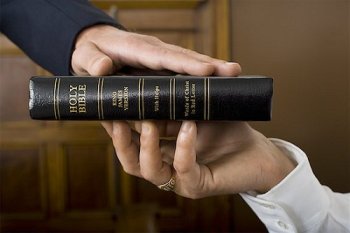 Jessica Vautier argues that the proposal for a new oath isn't an attack on Britain's religious heritage. It is an attempt to make the justice system fairer, and for everyone to be treated equally.

Bristol magistrate Ian Abrahams hit the news last week with his proposal to abolish religious oaths in courts. The debate will be occurring at the Magistrates' Association AGM on Saturday 19th October in Cardiff.

Predictably, this has caused some upset in the higher echelons of the Church, with the Rev. Arun Arora (the Church of England's Director of Communications) even going so far as to say such proposals are "driven more by blinkered campaigning agendas than abiding interests in justice and truth".

As somebody in the legal profession who is very concerned about truth and justice, I believe that secularists should be vocal in supporting the magistrate's proposal ­– but first, it is important to know exactly where we stand.

Section 1 of the Oaths Act 1978 dictates the swearing of an oath on the New Testament (or the Old Testament if one is Jewish), beginning with the words "I swear by Almighty God". Only if someone "voluntarily objects" to taking this oath is there an opportunity to swear a non-religious affirmation (under Section 5 of the Act) as an alternative.

Incidentally, the option for an affirmation was originally included in order to accommodate religious people (e.g. the Quakers) who consider it blasphemous to swear on the Bible, rather than for the benefit of the non-religious. Removing the religious oath would not be anti-religious, but pro-equality.

The argument I hear most frequently against uniform secular oaths is that religious people are more likely to tell the truth if they are allowed to swear on their holy book. I am utterly unconvinced by this – such stereotypes are exactly the sort of assumptions that we should be trying to help decision-makers in court to avoid.

Call me militant, but I don't see why the first thing a jury finds out about a defendant or witness should be which (if any) religion they subscribe to. This piece of unnecessary information is then subject to their hypotheses – is a religious person more likely to tell the truth than a non-religious person because they have a holy book to swear on? If we know someone is religious but has chosen not to swear on the Bible, does this mean they are planning to lie? Are followers of certain religions more trustworthy than others?

As David Allen Green has previously pointed out, there is no way of telling whether somebody taking an oath on the Bible is religious or not, and the religiosity or otherwise of the oath-swearer makes no difference to the legal validity of the oath, which rather defeats the object. Further, if (as according to Abrahams in his interview with the Mail on Sunday) people are taking their oaths sworn on the Bible less and less seriously, the presumption that swearing a religious oath makes people more likely to tell the truth is not only incorrect but potentially damaging to the accurate decision-making of a jury or a magistrate.

Ian Abrahams' suggestion is to replace the current religious oaths and non-religious affirmations with a standardised oath, stating: "I promise very sincerely to tell the truth, the whole truth and nothing but the truth and I understand that if I fail to do so I will be committing an offence for which I will be punished and may be sent to prison".

If it's threats of punishment that make people more likely to tell the truth, the threat of prison is far more immediate than the threat of God's displeasure, and it applies to the religious and irreligious alike.

It would, at the very least, prevent the magistrate or jury from considering the religious inclinations of a witness rather than the evidence before them, when evaluating their truthfulness. The religious stand to gain from such a proposal too, by preventing decision-makers with prejudices from exercising them (consciously or otherwise) in their judgments.

This is a suggestion for a secular oath, not an atheist one. It is not an attack on our "religious heritage", as has been claimed, but a deliberate attempt to make the justice system fairer. It makes all people equal (at least until they start answering questions).