Egyptians are in urgent need of the protection secularism can offer 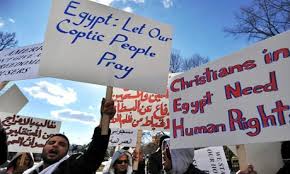 Earlier this week a ten year old child was shot dead as she walked home through the streets of Cairo on her way home from Bible study.

Jessi Boulus was the latest target of Islamist extremists who have targeted Egypt's Christian minority, holding them partly responsible for the removal from power of President Mohammed Morsi and his Muslim Brotherhood party.

According to Amnesty International, at least seven have been killed, scores injured, and homes, churches and other Christian property destroyed.

The Barnabas Fund report anti-Christian slogans have been spray-painted on the walls and Christian homes, stores and places of worship marked with large red crosses. In Sohag, Upper Egypt, Morsi supporters have raised the al-Qaeda flag over a Church as they chanted that Egypt should be an Islamic state, despite the wishes of secularists.

Today, security forces have cleared two camps in Cairo occupied by protestors demanding the reinstatement of deposed Islamist President Mohamed Mursi. There are conflicting reports about how many citizens have been killed in this latest violence.

Political chaos has ensued ever since Mohamed Morsi was ousted by army following massive public protests against his rule and efforts to find a peaceful resolution appear to be leading nowhere.

But one thing is clear. Democratic elections alone will not restore stability for the people of Egypt.

Before any election takes place, the rules of engagement need to be established. For these rules to be fair for all, Egyptians must adopt a secular constitution. Without it, the corrosive 'winner takes all' approach attitude will prevail, leaving minorities oppressed by the religious will of those in political power.

Secularism underpins democracy. Without it, democracy in religiously plural nations simply cannot survive. The Muslim Brotherhood's attempt to impose its brand of Islamic government on Egypt through its Islamic constitution was a key factor in Morsi's overthrow.

Islamists will of course reject secularism — rightly perceiving it as a threat to their ability to force their religious will on others. But everyone concerned about human rights and freedoms — religious and non-religious — have common cause in hoping for a secular state in Egypt.

Modern Egypt was built on a foundation of separation of religion and state. Secularism still provides the only realistic roadmap to national unity for the people of Egypt.