It may be a new velvet glove, but it’s the same old iron fist at the Vatican 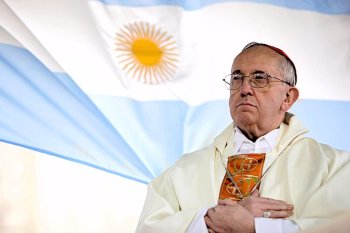 You've got to give the Vatican credit for having installed a Pope who appears to be nice and cuddly and says all the right things. But as with everything pertaining to the Vatican, one needs to keep a sceptical antenna waving. Nothing is as it seems in that kingdom of lies and deception.

The propaganda coup that they have pulled off by getting rid of the disastrous Ratzinger (retired through ill-health? Give me a break! It's clear, to me at least, that he was disposed of) and replacing him with the apparently cuddlier, kindlier and more modest South American, is brilliant.

But for those who are prepared to look beyond the carefully constructed image, it is clear that Senor Bergoglio is, in fact, as hard and unyielding as his cold-hearted predecessor.

Bergoglio has just scored a big hit in Brazil where his inflated spectaculars rallied great crowds on Copacabana beach. On the plane back to Rome he answered questions from journalists who wanted to press him on the same "hot button" issues that so tormented Herr Ratzinger — and from which they gleaned so many column inches.

It was very revealing. Take away the apparently emollient words and Bergoglio says exactly the same as Ratzinger. He thinks homosexuals should be treated with respect ("Who am I to judge? You can't marginalise these people," he says patronisingly). But then he goes on to say that the Church still condemns homosexual relationships and always will. So, it's business as usual and his implacable opposition to gay marriage remains unshakable.

Put the kettle on, sister — and my apartment needs cleaning.

He says that God "forgives and forgets" sins if there is repentance (but he, quickly adds, God doesn't forget crimes, such as the rape of children).

So the Vatican's despicable history of persecution and corruption is all OK now because it repented and God has forgiven and forgotten. Handy, isn't it? And I'm sure all those heretics it burned at the stake and those women it used as slaves in the Magdalene Laundries will take great comfort from the fact that the Vatican is truly sorry. So just shut up about it and let it drop, will you?

Bergoglio makes big noises about being the pope of the people, the pontiff of the poverty-stricken and the weak and disenfranchised. He makes very public gestures about living in modest accommodation and not wanting to wear fancy costumes all embroidered with jewels. What's not to like?

Well, if he is as orthodox and dogmatic as this talk to journalists suggests, then his heart is as hard as any tyrant's. He will do nothing about the ban on condoms in countries afflicted by AIDS, he will do nothing to force the hands of the religious orders who refuse to pay for their past cruelties in Ireland and leave it for the taxpayer to pick up the tab. And we have yet to see any move to address the issue of child rape and exploitation by priests. (He made it illegal in Vatican City, but how many children live there?).

The Vatican's untold wealth remains untouched, while millions starve. He makes patronising gestures like washing the feet of prisoners. But his past shows that he is conservative to the core and will change nothing except, perhaps, the window dressing of the papacy.

Bergoglio is going to have to do more than smile and speak in a kindly voice to convince this cynic that he is one iota different to the two horrors who sat on the throne of St Peter immediately before him.

He is no reformer. If he had been, the powers-that-be in the Holy See wouldn't have let him anywhere near the papacy.