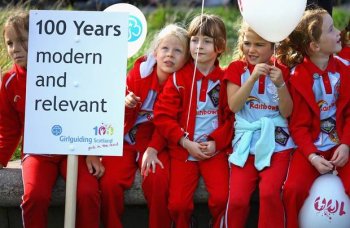 Some Christian commentators have sought to portray this as yet another 'attack on Christianity'. It is of course nothing of the sort.

It is true that the privileged status of Christianity in the UK is slowly beginning to crumble. Christianity is now regarded as one influence among many that shapes modern Britain; we're now a nation of many denominations and religions and large sections of the population do not hold, or practise, any religious beliefs. The Girlguides are simply reflecting the reality of changing times. It's also worth remembering that Girlguiding is not and never has been a Christian organisation.

There is undoubtedly a shift away from religion going on, certainly amongst younger generations, and this new Promise is emblematic of that shift. According to the Girlguides: "Those who participated in the consultation felt that 'to love my God' did not truly reflect the society we live in". Many others commented on the need for the Guides to be open to all and to respect the beliefs of others, including those with no specific religious belief.

Separate Polling carried out last year by Girlguiding found that 70% of girls aged 7 to 21 thought that religious belief should be personal, and should not affect public issues such as education or politics. This clearly shows that the Guides new Promise reflects the attitudes of its core demographic. This week's poll in the independent also suggests the public are behind the move.

The decision to replace the phrase 'to love my God' with 'be true to myself and develop my beliefs' has come under fire from certain religious commentators for been in some way narcissistic. This possibly reveals more about those that sneer than anything else.

"God help us when Girl Guides ditch religion for the shallow cult of the individual" lamented Stephen Glover in the Daily Mail. But "Be true to myself" (which is reminiscent of Shakespeare's line from Hamlet where Polonius advises "To thine own self be true") does not, as Christina Odone suggests, mean that "It's now all about "Me" and the anything goes spirituality". Surely it's more about not sacrificing personal integrity for the sake of conformity. It's about following what you believe over what people pressure you to do. Surely a very positive message for young girls.

Odone goes go on to say "today's secularist authorities seem bent on erasing [God] from public life. They are getting their way – and meeting little resistance".

Who are these "secular authorities"? Nobody is imposing this on the Guides. The Girlguides made their own minds up. Nearly 44,000 people took part in this consultation and this is their decision. It's almost as if some people have a problem with women and girls having control of their own destinies. Surely not?

From the reaction of some you'd have thought the Girlguides had come up with a new atheist promise – or that their approach was in some way hostile towards religion. Again, not true. Their approach is classically secular – and there is nothing "anti-religious" about secularism, however much it may suit some people's agenda to pretend so.

Girls with religious beliefs will still be free to develop those beliefs within the Guiding movement. But by removing the religious presumption and creating a new secular Promise, the Girlguides are simply making clear that the two thirds of young girls who don't regard themselves as religious are also welcome to join and are equally valued by the organisation.

When the Scouts reveal their new Promise later this year, they too are likely to welcome the non-religious, but by introducing a new non-religious oath, which unnecessarily pushes children into adopting a religious (or non-religious) identity before they really know what they think about such things.

By introducing one secular oath for all, the Girlguides have decided to focus on common values that unite, rather than place an emphasis on religion, which can too easily divide – and for this they should be congratulated. This sort of secular approach is exactly what's needed in our education system. But in an area where the Church of England still wields enormous power, don't hold your breath.

Stephen Evans is the campaigns manager of the National Secular Society.