Dare To Stand Alone: The Story of Charles Bradlaugh 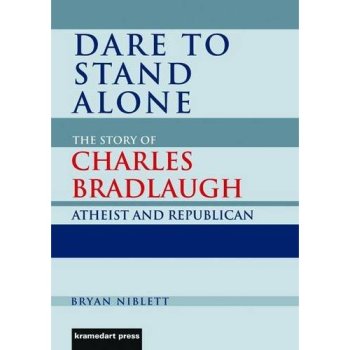 Charles Bradlaugh, the man who founded the National Secular Society in 1866, had a short but dramatic life, which is vividly portrayed in this new biography. Reviewed by Terry Sanderson.

Bryan Niblett makes clear that since his childhood he has been thrilled by stories of heroism. His early heroes of cowboys like Tom Mix and space explorers like Buck Rogers were rapidly replaced by real-life pioneers, and at the age of fourteen he discovered Charles Bradlaugh.

Here was a man who didn't fight with his fists but with his intellect. He supplied Bryan with "a new dimension to my understanding of heroes: the recognition that the virtue of thinking for oneself, of engaging in action founded on reason as the guiding principle, was the essence of real heroism."

By that definition Bradlaugh would be hard to surpass. The comic phrase uttered by Kenneth Williams as Caesar in the film Carry on Cleo would have been greatly apposite to Bradlaugh: "Infamy! Infamy! They've all got it in for me!" Indeed, at many points in his life, it seemed to be Bradlaugh against the world.

But there was nothing funny about Bradlaugh's struggle against the establishment forces that were ranged against him, mainly because of his loudly-trumpeted atheism. The government, reactionary politicians and the church were all determined to silence his magnificently resonant voice, with its message of freethought, education for all and justice for those who had no religion.

From his humble beginning, Charles educated himself through a process of sheer determination and an almost superhuman application to become one of the leading legal minds of his day. He had no qualifications, but in the innumerable court cases in which he became embroiled, he defended himself with consummate skill, much admired even by those who challenged him.

He founded the magazine The National Reformer which provided the platform for his progressive ideas. This led to the formation of the National Secular Society which provided another outlet for his radical ideas about religion and its effects on society.

Soon he was joined in these endeavours by an exceptional woman called Annie Besant. Like him, she was a brilliant platform speaker and lecturer and with their combined skills of natural intellect, clear thinking and boundless energy, they created a movement that posed a threat to the very constitutional structure of England.

They stood trial together on charges of publishing an obscene pamphlet, namely The Fruits of Philosophy, which covered the topic of birth control and cost only 6d., making it available to the masses. After being found guilty, they were about to be taken to the cells to begin a six month prison sentence, when a last minute pang of conscience from the judge spared them that punishment.

He stood for election in the constituency of Northampton and was twice unsuccessful. On his third attempt he was elected and what followed was the legendary battle of wills and wits between Bradlaugh, the electorate and a spiteful and malignant Christian and Conservative opposition in parliament.

The story of Bradlaugh's attempt to take the oath, and thence his rightful place in Parliament, has become legend. But the detail contained in this book reveals the sheer scale of his opponents' determination to destroy him. He was repeatedly rebuffed by those who had convinced themselves that an atheist in parliament would mean the end of morality and the downgrading of the Christian hegemony that ruled the place. Obscure parliamentary procedures were disinterred to be used ruthlessly to exclude him.

This book faithfully records the many battles that Bradlaugh needed to undertake – any one of which would have demoralised and demotivated the average person. But Bradlaugh was far from the average person. Despite being imprisoned in the Clock Tower under Big Ben and brutally manhandled from the parliamentary chamber, he would not relent in his determination to take his seat.

Bryan Niblett's book is beautifully written, engrossing and enchanting, and researched with meticulous care. A quote on the back cover from G.W. Foote reads, "Bradlaugh's legal exploits, if properly recorded, would fill a good-sized volume. When his life is adequately written, as it will be some day, this department will have to be entrusted to a skilled lawyer."

As a barrister, Bryan Niblett fits the bill superbly. He has a great grasp not only of the legal system as it was constituted in the nineteenth century, but also of the parliamentary procedures that were extant at that time and which were used so viciously to thwart Bradlaugh.

For those interested in the early freethought movement, this is a goldmine. For those looking for an enthralling tale of one principled man's struggle against an entrenched world of privilege, it is an inspiration.

Dare to Stand Alone (Hardback) is available for purchase.