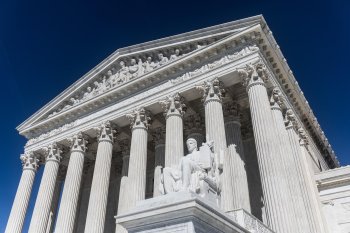 The National Secular Society has expressed dismay that a Supreme Court decision will result in millions of women in the United States losing abortion rights.

Today the US Supreme Court overturned the 50 year old Roe v Wade ruling that legalised abortion throughout the country.

Half of US states are expected to introduce new restrictions or bans as a result. Thirteen have already passed 'trigger laws' that will automatically outlaw abortion following the ruling.

In the landmark 1973 Roe v Wade case, the Supreme Court ruled that a woman's right to an abortion in the first three months of pregnancy was protected by the US constitution.

Today's decision overturned that ruling by finding in favour of the Mississippi state in a case that challenged the state's ban on abortion after 15 weeks.

The NSS has sent a statement to the campaign group Abortion Rights to be delivered at their protest at the US embassy in London at 7pm tonight. Protests are also planned in Cardiff and Edinburgh.

The statement said: "This decision is a blow to women's reproductive rights.

"Today is a dark day for America, where, without a constitutional right to abortion, millions of women will be stripped of their right to choose.

"It also signals a worrying victory for the religious right over constitutional separation of church and state - a victory that anti-choice campaigners around the world may attempt to replicate in their own countries.

"We must be vigilant and ensure religious dogma is not allowed to impose on women's reproductive rights in this country or anywhere else."

The British Pregnancy Advisory Service (BPAS) are asking women's rights supporters to send a message to Secretary of State for Foreign, Commonwealth and Development Affairs Liz Truss, urging her to "send a clear signal that the UK does not support the removal of a woman's right to access abortion care", and commit to protecting UK funding for reproductive health and rights programmes globally.

Image by Mark Thomas from Pixabay

We strongly support the right of women to have legal and safe abortions and access to emergency contraception.