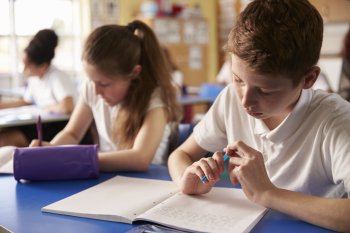 The government has said it has no estimate of how many children are effectively forced into faith schools, or left unable to attend their local school because of religious discrimination, in England.

Blunt asked what estimate the education secretary had made of the number of pupils with "no reasonable choice other than to attend a faith school due to lack of secular provision in their area".

He also asked for an estimate of "the number of pupils unable to access their nearest school because of religiously selective admissions".

In response Gibb said the Department for Education hadn't made an estimate of either figure.

He said "the majority of parents are offered a place at a school of their choice".

He added that local authorities "have a duty to provide sufficient school places in their area" and faith schools are "popular with parents".

Last year NSS research found that more than 130,000 children had been sent to faith schools in England despite their parents expressing a preference for a non-faith school since 2014.

And in 2018 a major NSS report, The Choice Delusion, found that almost three in 10 families in England lived in areas where most or all of the closest primary schools are faith schools.

The NSS also frequently works with families who are unable to attend local schools due to religious discrimination, and local campaigners who object to plans for discriminatory faith schools.

In recent months these have included proposals to open new schools in Peterborough and Kingston-upon-Thames.

Earlier this year the NSS also launched a collection of research on the impact of state-funded faith schools. The bank significantly undermines the claims commonly made in their favour.

"The government often tries to justify faith schools on the basis of parental choice – as it has in response to these questions. But ministers appear uninterested in the fact that faith schools restrict choice for thousands of families every year.

"A society which valued the rights of its citizens equally would end faith-based discrimination and roll back state-funded faith schools. The state should support inclusive secular schools which enable children to form their own views on religion and educate them together, regardless of their religious background."