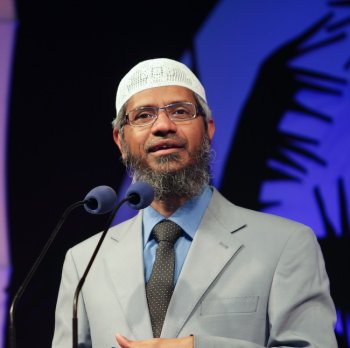 The Charity Commission has appointed an interim manager who will "consider the future viability of" Islamic Research Foundation International, a charity accused of promoting Islamist extremism.

The regulator said it had "serious concerns" about the administration of IRFI as it announced the move this week.

Earlier this year the commission opened a statutory inquiry into the charity, which aims to advance the Islamic faith by funding the Peace TV network.

The National Secular Society has repeatedly raised concerns about IRFI over the last two years.

The chair of IRFI's listed trustees, Zakir Naik (pictured), has been banned entry to the UK over security concerns.

Last year the Charity Commission said it had disqualified Naik as a trustee, but added that he was challenging the decision.

The NSS questioned Naik's involvement with IRFI in a letter to the commission in 2018.

As part of her work the interim manager will be tasked with considering the future viability of the charity.

"This organisation has long been a cause of concern due to its apparent promotion of extremist propaganda via Peace TV, and for having a trustee who has been banned entry to the UK over security concerns.

"If the commission's inquiry finds IRFI doesn't serve a public benefit, it shouldn't be a charity at all."