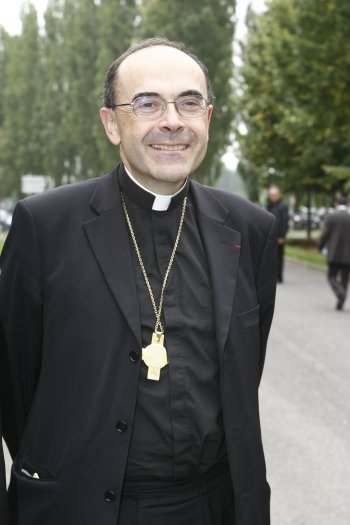 The most senior Catholic official in France, the archbishop of Lyon Philippe Barbarin, has been convicted of covering up sexual abuse and given a six month suspended prison sentence.

Barbarin was convicted of failing to report a priest's repeated sexual abuse of 70 minors on Thursday.

The National Secular Society has said the conviction is a reminder of the need for a law requiring the mandatory reporting of suspected child abuse in the UK.

In 2016, charges were dropped by the public prosecutor against Barbarin after Pope Francis publicly intervened. Victims then mounted a private prosecution.

The success of the resultant trial is a huge triumph for victims. Their effort was low budget and widely predicted to fail, and the public prosecutor had advised against a conviction.

The NSS took an interest in the handling of Barbarin's case during a protracted process. Through international affiliates, the NSS raised the prosecutor's dropping of charges and a later abandoned trial with the French minister of justice.

Barbarin had known of the abuse, which was first complained of in 1991, since at least 2010. In court he admitted his reaction to abuse accusations was "belated" and blamed bad legal advice.

A top Vatican official also advised him to "avoid public scandal" but – amid widespread criticism – avoided being cross-examined by citing immunity from prosecution.

The defence resorted to expressing surprise that the victims blamed the church for not having broken the silence, rather than their parents or other adults caring for them. This was despite its acknowledgement that few parents knew about the abuse.

One victim described the verdict as a "major victory for child protection" and "a strong message… to the French church, to the world and to Pope Francis", adding that it would "hugely encourage people to speak out".

Barbarin will appeal but has offered his resignation to the pope.

Victims of George Pell, who as Vatican treasurer was the third most senior Catholic in the world and was recently convicted of abuse in Australia, have now launched a civil action too.

Barbarin's victims' fight has been depicted in a film that has been screened in France despite the alleged perpetrator not yet having faced trial. The title By The Grace Of God comes from a Barbarin quote: "Most of the facts, by the grace of God, fell outside the statute of limitations."

NSS president Keith Porteous Wood said: "The conviction of Barbarin, and last week fellow arch-conservative Cardinal Pell in Australia on 5 counts of sexual abuse of minors, marks a turning of the tide and the pope would cause further outrage if he refused to accept Barbarin's resignation.

"I hope questions will be asked in constitutionally secular France as to why public prosecutors were so keen to spare Barbarin from both prosecution and conviction in the face of such damning evidence.

"It is also sobering that the Barbarin trial could not take place in Britain as we do not have mandatory reporting - despite over 80% of nations having some form of it. It is essential that we urgently legislate to introduce mandatory reporting of known or suspected institutional child abuse, without exceptions for admissions in the confessional."