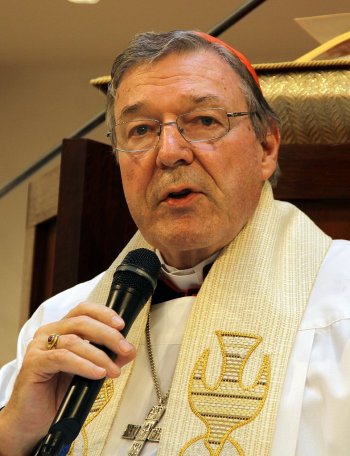 The Vatican's former treasurer George Pell has been sentenced to a total of 11 years and nine months in prison for sexual activity with children in his native Australia.

Cardinal Pell, who was until recently regarded as the Vatican's number three and had been known as the 'pope in waiting', was convicted on five charges. He is the most senior Catholic figure ever to be found guilty of sexual offences against children.

The combined total of his sentences was reduced to six years as the judge allowed some of the terms to be served concurrently. This was partly because of Pell's age and the unlikelihood of further offending.

Pell will not be eligible for parole until serving three years and eight months. The judge acknowledged, given Pell's poor health, the "real possibility that you may not live to be released from prison".

The judge also rejected Pell's defence argument that the crimes were committed by Pell the man, not the archbishop.

"Your obvious status as archbishop cast a powerful shadow over this offending… There was breach of trust and you abused your position to facilitate the offending."

Pell continues to maintain his innocence. The judge observed that he had showed no "remorse or contrition" which would have reduced his sentence.

Pell has been kept in isolation for 23 hours each day, because he has been designated an "at-risk" prisoner due to his age, high profile, and the nature of his crime.

After the verdict was announced, Pell's top-flight lawyer dismissed one of the charges as "no more than a plain vanilla sexual penetration case where the child is not actively participating".

This provoked such international outrage that he took the unprecedented step of publicly withdrawing the claim. Pell sacked the lawyer, but it is not known whether it was for this, losing the case or to make way for someone else to run an appeal.

National Secular Society president Keith Porteous Wood said: "Practically the entire hierarchy of the Catholic Church brazenly continues to resist punishing offenders and those that shield them, and giving appropriate reparations to those abused.

"Adherents are voting with their feet, for example in Australia and the US. And belatedly, the law is now stepping up to the task by convicting the hitherto unconvictable and paving the way for massive compensation."

Dr Kezelman, a representative of a victims' group, said: "For too long, hermetically sealed systems of power, such as within the Catholic Church, have called the shots, protecting the church, its hierarchy and themselves.

"Hopefully this sentence can herald fundamental change to the church and other institutions, starting with accountable, responsible and transparent leadership, hierarchy and culture."

A leading Catholic and the author of a major report on abuse in the Catholic Church, Professor Des Cahill, described the sentencing as "a momentous event".