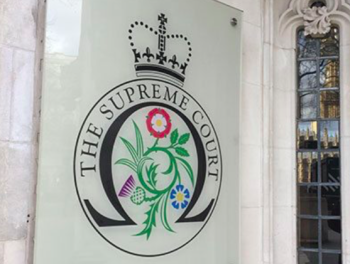 The owners of a bakery that refused to make a cake with the slogan "support gay marriage" were not discriminatory, the Supreme Court has ruled.

The Christian owners of Ashers Baking Company in Northern Ireland appealed to the Supreme Court after they were sued by Gareth Lee in 2015.

Mr Lee complained to the Equality Commission for Northern Ireland (ECNI) after his order at an Ashers shop in Belfast to make a cake iced with message "support gay marriage" was cancelled.

The shop initially accepted the order, but two days later the firm's head office contacted Mr Lee and said that it could not fulfil the order. It said it could not print the requested slogan because it was a Christian business.

In 2015 the presiding district judge found that refusing to complete the order was direct discrimination on the grounds of "sexual orientation, religious belief or political opinion."

Ashers' owners additionally lost a subsequent appeal, but on Wednesday won their appeal at the Supreme Court.

The five justices on the Supreme Court were unanimous in their judgement.

The court also highlighted that the bakery both employed and served gay people and "treated them in a non-discriminatory way".

The court additionally rejected the claim that Mr Lee had been discriminated against for his political beliefs, comparing the case to "a Christian printing business being required to print leaflets promoting an atheist message."

President of the Supreme Court Lady Hale said in the judgement, "In a nutshell, the objection was to the message and not to any particular person or persons.

"In reaching the conclusion that there was no discrimination on grounds of sexual orientation in this case, I do not seek to minimise or disparage the very real problem of discrimination against gay people."

She also added that it is "deeply humiliating" and "an affront to human dignity" to deny someone of a service because of their sexual orientation or any other protected characteristic, but "that is not is not what happened in this case and it does the project of equal treatment no favours to seek to extend it beyond its proper scope".

Lady Hale also said that the court "is not holding that the company has rights under article 9" but that "it is upholding the rights of the McArthurs under that article". Article 9 of the European Convention on Human Rights guarantees the right to freedom of thought, conscience and religion.

Michael Wardlow, chief commissioner of the ECNI, said the commission would study the implications of the judgement carefully.

He said: "There is a concern that this judgement may raise uncertainty about the application of equality law in the commercial sphere, both about what businesses can do and what customers may expect."

National Secular Society CEO, Stephen Evans, said it was "reasonable for the Supreme Court to conclude that Ashers discriminated against the message, not the man".

"The specifics of this case means the ruling is unlikely to be of wide application. The judgement doesn't change the fact that it is illegal for providers of goods, facilities and services to discriminate on grounds of sexual orientation.

"However, it has created a potentially confusing grey area for shoppers whereby businesses can 'opt out' of supplying services where the owners disagree with the message a customer wants to convey. We hope this doesn't embolden bigots by allowing them to use 'disagreement with the message' as a cloak for refusing services to people on the basis of who they are."