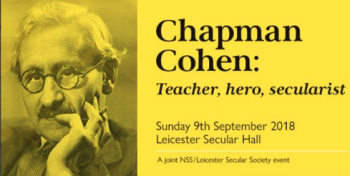 The talk, entitled Chapman Cohen: Teacher, hero, secularist, will be held in Leicester on Sunday 9 September. It will commemorate the 150th anniversary of Cohen's birth.

Cohen was born in Leicester and served as president of the National Secular Society for 34 years from 1915 to 1949. He also edited The Freethinker, wrote numerous books and pamphlets, and lectured and debated across Britain. He championed the secularist causes of his day, including by opposing religious influence in schools and on the BBC. For many he was a hero and great teacher who spoke, wrote and debated more in the cause than anyone ever has.

Robert (Bob) Forder, a member of the NSS council with a particular interest in the history of NSS, will deliver the talk. He has written extensively for The Freethinker and other radical publications.

The event will take place at Secular Hall in Leicester, which was built over 130 years ago as the home of Leicester Secular Society. It has previously hosted speeches by campaigners including William Morris, Charles Bradlaugh, Annie Besant, George Bernard Shaw, Bertrand Russell and Tony Benn.

The talk will be repeated at Conway Hall in London on Thursday 13 September, starting at 7:00pm.

The Leicester event begins at 6:30pm and is free to attend. Leicester Secular Hall is open during the day (10am-4.30pm) for a heritage open day, including tours of the building and an exhibition of the history of the society and its hall.