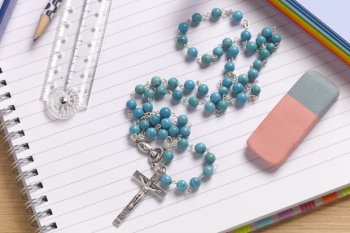 British adults are strongly opposed to religious influence in school admissions, assemblies and the teaching of Religious Education, a National Secular Society-commissioned poll has found.

The survey found that fewer than one in six British adults agree with religious selection in state schools generally. Fewer than one in three support it even when they are specifically asked about faith schools.

A majority (52%) say school assemblies should be about moral issues, whereas just over a quarter (26%) agree that they should feature religious worship.

And just 14% of respondents disagreed with the statement: "State-funded faith schools should be obligated to teach RE in a way that is inclusive of all religious and non-religious belief systems".

The findings suggest education policy across Britain is out of step with the views of the public.

Last month the education secretary Damian Hinds announced that he would not lift the 50% faith-based admissions cap on new free schools in England, following NSS campaigning. But he announced a new wave of voluntary-aided schools, which will allow religious groups to open schools which can select 100% of their pupils on a religious basis.

In recent weeks the Scottish government has committed to the future of state-funded Catholic education, while the Welsh government has said religious schools will continue to be allowed to teach sex education according to their faith ethos.

In response to the poll campaigners including NSS chief executive Stephen Evans and honorary associate Peter Tatchell have called for a rollback of religion's role in state schools.

Mr Evans said the findings showed that "our current education system simply does not align with the views of the public when it comes to religion's role".

"Most people take a much more secular stance and don't want children to be exposed to overbearing religious influence in their schools. It is impossible to imagine a system in which state schools were allowed to select pupils on the basis of whether their parents shared the same political views. That should be the case for religion too – and very similar proportions of people agree with religious selection as political selection.

"We were pleased to see the education secretary decide against lifting the cap on faith school entry recently. However, this does not cover voluntary-aided faith schools and we would urge against any future attempt to increase selection by religion through the back door.

"The National Secular Society is proud to campaign for a fair and inclusive education system and it is pleasing to see that these values are reflected across the wider public. In particular, Religious Education and Sex & Relationships Education teaching must be consistent across all schools, ensuring all children gain a comprehensive and impartial grounding in religious and ethical issues."

Mr Tatchell told us: "To ensure a cohesive and harmonious society, it is more important than ever that our children can enjoy a diverse and fair education, with the opportunity to learn from each other's differences. Government policy should reflect the low level of public support for religious selection in state-funded schools. I am proud to support the National Secular Society's campaign for an inclusive education system."

The NSS campaigns to roll back religious influence in schools. We recently launched our No More Faith Schools campaign. We also champion an end to end compulsory worship in schools and call for all children to be entitled to an impartial curriculum about religion and belief issues.

The company Censuswide carried out the poll of 2,003 British adults.