Religion a major source of tension in Britain, poll finds 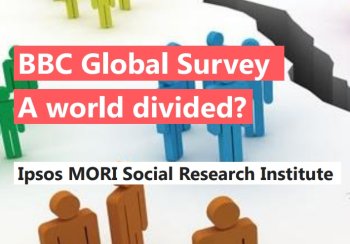 The National Secular Society has said policy makers must avoid dividing people along religious lines after a poll found that religion is a major source of tension in British society.

A survey by Ipsos-Mori for the BBC found that 47% of people in Great Britain thought differences 'between different religions' were among the most significant divisions in the country.

Ipsos-Mori asked respondents between which groups, if any, they thought 'there is most tension' in their country today. Religious differences got the second highest score of eight possible answers. Only differences 'between immigrants and people born in Great Britain' scored higher, with 50%.

Respondents in Britain rated religious differences as more significant than those based on wealth, ethnicity, age, politics, gender and where people live.

The pollsters put a series of questions about social divisions to people in 27 countries. In the survey as a whole 27% of people cited religious differences as a significant source of tension.

The poll also found that people in Britain think their society is divided but see the benefits of mixing with people from different backgrounds, including those with different religious views.

Eighty-five per cent of people in Britain think their society is 'very' or 'fairly' divided. This was the seventh-highest score out of 27 countries. More than seven in 10 (73%) British respondents also said their society was 'more divided' now than a decade ago, with just seven per cent saying it was 'less divided'. Britain was the fifth-highest scoring country on this measure.

When asked whether Britain had become more or less tolerant of 'people with different backgrounds, cultures or points of view' over the last 10 years, 49% of respondents said 'less'. Twenty-seven per cent said 'more'.

Forty-six per cent of British respondents said mixing with people from other religions 'leads to mutual understanding and respect', with only 11% saying it 'causes conflict'. Thirty per cent said it 'can sometimes lead to misunderstandings but these can usually be overcome'.

A majority of British respondents (52%) said mixing with people from other backgrounds, cultures or points of view 'leads to mutual understanding and respect'. Just eight per cent said it 'causes conflict', with 28% saying it 'can sometimes lead to misunderstandings but these can usually be overcome'.

Seven in ten people in Britain also said 'people across the world have more things in common than things that make them different'.

NSS spokesperson Chris Sloggett said the findings dealt "a comprehensive blow to those who insist on defining British citizens by their religious identities".

"These findings show that the British people are alarmed by religious divisions – but it also seems fair to conclude that they are open, at the very least, to measures which would alleviate them.

"Let this be a reminder to those who make public policy of the harm caused by dividing people along religious lines. Policies which cut people off into cultural silos or bow to demands for special treatment simply undermine social solidarity and fuel mutual mistrust.

"And dividing children into faith schools where they are considered to inherit their parents' religion is particularly wrong-headed."

Ipsos-Mori interviewed 19,428 adults across the 27 chosen countries between 26 January and 9 February this year. In 16 of the countries the company said the samples were nationally representative; in the rest it said they were "considered to represent a more affluent, connected population".