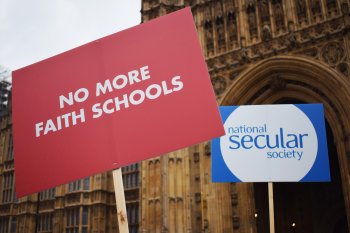 The National Secular Society has launched a new national campaign dedicated to ending state-funded faith schools, with backers including historian Dan Snow and the politician and former actor Lord Cashman.

The No More Faith Schools campaign will highlight the widespread concerns and myths that surround faith schools of all types and urge the creation of an inclusive, secular education system.

The NSS will use the campaign to demonstrate the problems associated with faith schools. These include the enabling of religious groups to use public money to evangelise to children, the undermining of social cohesion, the segregation of children on social, ethnic and religious lines and the undermining of freedom and equality.

The campaign's website and social media channels will encourage supporters to petition the government and write to MPs in favour of "an open and inclusive education system, free from religious discrimination". Supporters will also be able to share their stories and reasons for backing the campaign and get free campaign posters.

The NSS has produced a short launch video for the campaign.

"Our campaign highlights the inequity they cause in our society. At the National Secular Society we ardently believe that no one should be marginalised or segregated on the basis of faith. We are proud to campaign for a fair and inclusive education system that creates a fair and inclusive society."

"In today's society, it is more important than ever that our children can enjoy a diverse and fair education, and have the chance to learn from each other's differences. The National Secular Society's No More Faith Schools campaign is an important step in this direction and provides a platform for those who want an inclusive education to show their support for that."

Politician and former actor Lord Michael Cashman CBE said: "There is too much segregation in life. As we live together so we grow through sharing and understanding, not by reinforcing a faith or belief or one set of values. Children from all faith and belief backgrounds should be educated together and allowed to develop their own beliefs independently and within the rich communities in which we all have to live."

A spokesperson for the campaign said: "This campaign is a platform to let people opposed to faith schools know they can do something about it. It will also serve to build bridges with those that might be ambivalent or supportive of faith schools, by busting the myths and highlighting the inequity they create in our society."

No More Faith Schools has been launched as the education secretary, Damian Hinds, is widely expected to relax admissions rules to facilitate a new wave of fully religiously selective faith schools. Under current rules new faith schools may not admit more than 50% of their pupils based on the religion of their parents. The NSS has vigorously campaigned against the plans.

Faith schools account for around a third of publicly-funded schools in England and Wales, while many Scottish and Northern Irish schools are divided along sectarian lines.