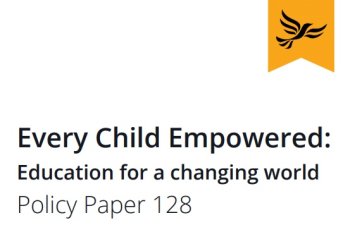 The policy paper "Every Child Empowered: Education for a changing world", published for the Lib Dems' 2018 spring conference, outlines the party's vision for education in the United Kingdom.

The paper pledges to "strengthen the hand of LAs [local authorities] to deal with unregistered schools, including by reviewing the legislation".

"Unregistered schools fall entirely outside the inspection and regulatory regimes for ensuring that children are in a physically safe and healthy environment, that they are safe from physical or sexual abuse, and that they receive an education that is fit for purpose and prepares them for adult life," the paper states.

"In the most extreme cases, English is not even spoken, so some children will not learn even basic English language skills."

Ofsted has since announced that it will receive a further £1m for its "illegal schools taskforce" to tackle unregistered schools.

"There have been cases of children who have come to serious harm while invisible to the system because they were being home schooled," it said.

"The number of such cases is small, and we would not want to see the vast majority of parents who home school their children extremely well put to great inconvenience, but we believe there is a duty to ensure the safety of such children."

Additionally, the policy paper said its "broad and balanced" national curriculum, which would be compulsory in all state schools including academies, would feature a 'curriculum for life'. This would include Relationships & Sex Education (RSE) and Citizenship. RSE would cover teaching about sexual consent, as well as LGBT+ issues.

"The Liberal Democrats have long campaigned for RSE being delivered earlier, and more robustly," the paper states.

The NSS campaigns for RSE to be taught in all state-funded schools, including faith schools, without being distorted or diminished through religious influence.

The Lib Dems' paper made no mention of religion or reference to the government's proposal to extend religious selection in schools by scrapping the 50% cap on faith-based admissions. However the party passed a motion at last year's spring conference tackling "the role of faith in schools".

Note: this story was updated, to reflect the fact that the Lib Dems passed a motion on the role of faith in schools last year, on 9 March 2018.