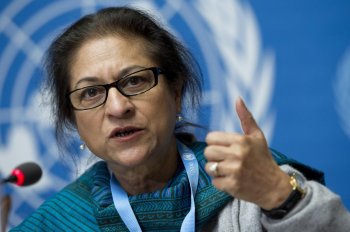 The National Secular Society is saddened to learn that honorary associate and human rights activist Asma Jahangir has died at the age of 66.

Ms Jahangir, a former UN special rapporteur on religion and belief, suffered a heart attack and died in Lahore on Sunday.

She worked courageously both in Pakistan and internationally for decades to prevent the persecution of religious minorities and women and the exploitation of children. She was the co-founder and chair of the Human Rights Commission of Pakistan and the first female president of the Supreme Court Bar Association of Pakistan.

She campaigned against Pakistan's blasphemy law, defending minority Christians charged with blasphemy – an offence which carries the death penalty. She was respected for her outspoken criticism of the country's militant Islamist groups. She co-founded the Women's Action Forum (WAF), a pressure group campaigning against Pakistan's discriminatory legislation.

She won several international human rights awards for her work and was included in Time magazine's list of the 100 most influential women.

Pakistan's militant religious right repeatedly threatened her and she recently called for an inquiry into reports that Pakistan's security apparatus was plotting to assassinate her. In 2007 she was placed under house arrest for participating in a lawyers' protest movement that led to the military leader Pervez Musharraf stepping down from power.

In 2008 she became the first woman to address the European parliament on religious matters. In her speech she called for constructive intercultural and interreligious dialogue inclusive of people of faith and no faith to "promote tolerance, respect and understanding".

She said: "Universal values should serve as a bridge between different religions and beliefs, and I do not accept the fact that universal values of human rights can be and should be subservient to either social or religious norms."

The NSS worked with her at the UN in Geneva on a number of human rights issues. Her commitment to secular justice led to her being shortlisted for Secularist Of The Year 2017.

Keith Porteous Wood, the NSS's president, paid personal tribute to her. "Asma was the most courageous person, demonstrated when Pakistan's Government threatened to execute her. A secularist to her core, she was probably the best UN special rapporteur for freedom of religion or belief there has ever been. She was also warm-hearted and a hero to many. She will be greatly missed."

Ms Jahangir is survived by her husband, son and two daughters. On Sunday crowds of friends, relatives, activists and journalists came to her Lahore residence to express their grief.